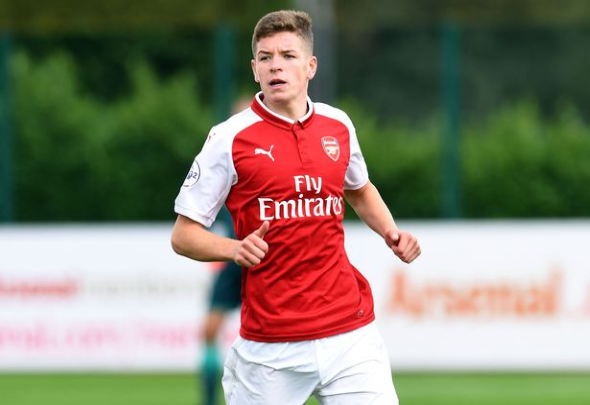 Arsenal midfielder Charlie Gilmour would be a “fantastic” fit for the Rangers, according to a close relative, and the boyhood Gers fan has a lot of friends at the Gers who could help him win a move to the Ibrox giants.

Gilmour has been on the fringes of the Gunners first-team this season and regularly travels up to Scotland to watch the Gers – and recently attended the Old Firm clash with Celtic.

The 19-year-old has two years left at Ibrox and his grandfather admitted he would “love” to see the Brighton-born midfielder play for the Gers.

“He was up at the game against Celtic. My boy got us tickets for it,” Gilmour’s grandfather Hugh said, as quoted by the Scottish Sun.

“He’s well known up at Ibrox. He’s got a lot of friends there. It would be fantastic to tell you the truth, I’d love it.

“He’s a great passer of a ball, his passing’s brilliant.

“He reminds me of Santi Cazorla and his passing is a bit like Steven Gerrard.

“I’m not saying he’s at that point yet but he’s coming on all the time.

“Not just because I’m a Rangers supporter but I’d love him to play for a club that size.”

The youngster was an unused substitute in the Europa League clash against BATE Borisov earlier in the season which Arsene Wenger’s side won 4-2.

Gilmour looks to have a bright future and having seen him play in person on a few occasions for Scotland, would be a good addition to the Gers ranks. While he would face a fight for a first-team place, he would definitely add something to the Light Blues’ squad. Arsenal seem to be a bit reluctant to let him move on and with two years left on his contract, it might not be something that happens anytime soon. It doesn’t really make much difference that he supports Rangers but if it makes the Gers a more attractive proposition then it is always a good thing.