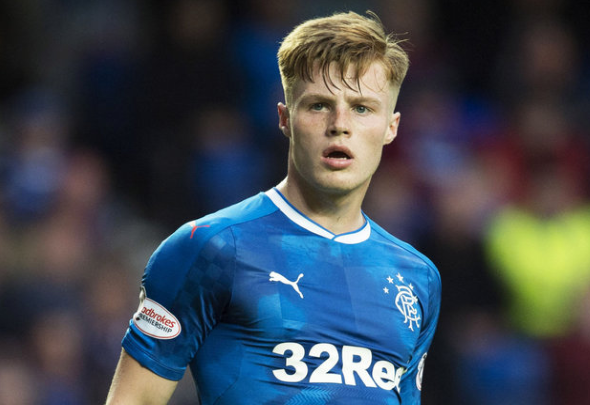 COMMENT
Rangers defender Aidan Wilson has joined Championship side Dumbarton on loan to get first-team experience – and it could prove to be the best thing for the youngster’s Ibrox career.
The Gers confirmed the move via their official website, signing on an emergency temporary deal.
Wilson has been on the fringes of the first-team at Ibrox since making his debut last season but had yet to make an appearance this term before heading to the Sons on a temporary move.
12 months ago Ross McCrorie made the same switch in search of regular games and came on leaps and bounds in his brief time there before returning to Ibrox and forcing his way into being a first-team regular for the Light Blues.
The youngster has shown remarkable progress over the last few years, with Gers Academy boss Craig Mulholland previously singling out Wilson for the massive strides he has made in improving his all-round game.
With a host of experienced players ahead of him in the pecking order at Ibrox, Wilson will be better served getting out and playing competitive football on a regular basis and continue his development in the Championship, following in McCrorie’s footsteps.
The Scottish youth international looks to have a bright future ahead of him at Ibrox and his temporary stint away from the Gers should help him take that next step towards becoming a regular Rangers star.
In other Rangers news, it can be revealed that a key first teamer has sensationally asked to leave after the board failed to stick to their promise of giving him a new deal during the transfer window.
Don’t miss out on breaking and exclusive Rangers news by clicking here for our brilliant 24/7 updates on Facebook, Instagram and YouTube.