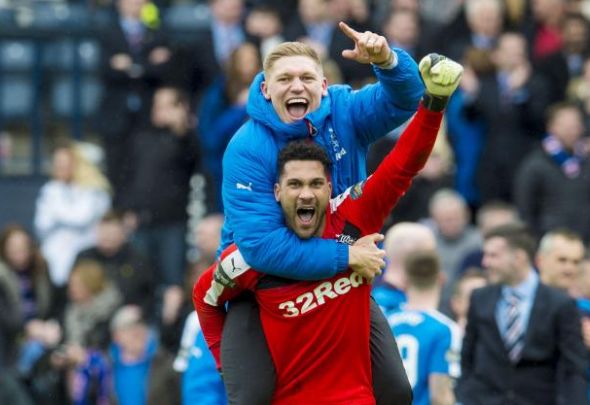 Mark Warburton is expected to make one change to the Rangers side on Sunday.

The Gers face an away match against Ross County in the league and will hope to continue their recent form.

Martyn Waghorn is set to replace Kenny Miller in the side in the only change to the team that beat Kilmarnock 3-0.

Veteran forward Miller, 36, failed to score in the last league match and Waghorn could be given his opportunity to make an impact.

Mark Warburton’s side are unbeaten in their last four league games and have moved up to second in the table, with a nine point gap behind leaders Celtic.

Ross County are currently 11th in the Premiership and just one point above Dundee at the foot of the table.

Warburton is set to stick with the same defence against Ross County, meaning goalkeeper Matt Gilks and right-back Lee Hodson miss out despite impressing when they have featured.

Rangers are expected to keep a familiar midfield trio who have impressed in recent games, with Andy Halliday scoring a penalty in the win against Kilmarnock.

Niko Kranjcar has been ruled out for the remainder of the season through injury and Joey Barton has returned to the side following his suspension by the club, but is restricted to training with the academy.

Joe Garner is expected to continue as the central striker and has scored two goals in his last two matches.

Michael O’Halloran and Waghorn are set to be deployed on the wings and the latter will hope to recreate his form from last season.

Waghorn fired Rangers to the Scottish Championship title and was in impressive goal scoring form all year, scoring 28 goals in just 36 appearances across all competitions.

He has scored just one goal in his eight league appearances this season and will want to cement his place in the team.

In other Rangers team news, their defender has revealed he is happy to play an attacking role.