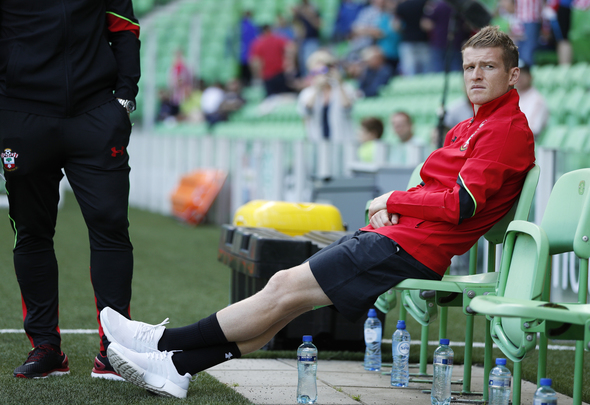 Rangers fans have taken to social media to urge the club to sign Southampton midfielder Steven Davis in the summer transfer window, with one demanding the Gers to “get it done”.
Davis left the Light Blues in 2012 to join Southampton and has been a consistently solid performer for the South Coast side since moving south – but according to Rocksport FM’s Bill Young on Twitter, there have been rumours over a return to Ibrox.

Rumours that Rangers have had talks with Steven Davis on a return to Ibrox in the summer but Murty preferring to look to the younger end of the market.

The 33-year-old has also been a big part of Northern Ireland’s recent success and captained the province at Euro 2016 in France and Rangers fans think it would be a “no-brainer” to sign Davis in the summer.
Here are some of their comments on Twitter:

Get it done. Instantly becomes the best midfielder in Scotland. https://t.co/4IoxwTciQu

@GraemeMurty, if Steven Davis wants to come back to Rangers, you go get him. https://t.co/uARVSWrBAU

Would have him back in a heartbeat. https://t.co/jrksEKWUIu

Would take Steven Davis back to Rangers no problem,he would dominstrate Rangers midfield & inspire others with his skillfull professional play.Would make him captain & let him live his dream. https://t.co/IBVdJ2Eb3Q

If Davis is even remotely interested then we should send Murty down there to give him a piggy back back up to Glasgow. https://t.co/dyBT15NVtG

Davis joined the Gers in January 2008 on loan from Fulham before making his move permanent that summer after helping the Light Blues to the UEFA Cup final.
After David Weir’s move to Everton, Davis was made club captain before moving to Southampton in the wake of the club’s financial meltdown in 2012.
The Northern Irishman won three Scottish titles, two Scottish League Cups and a Scottish Cup during his time at Ibrox and made 200 appearances for his boyhood heroes.
Davis’ contract at Premier League strugglers Southampton ends in the summer of 2019 and the midfielder has made 24 appearances so far this season for Mauricio Pellegrino’s side.
In other Rangers news, ‘Jesus Christ’, ‘Gutted’ – Rangers fans can’t believe club’s latest reported injury shocker