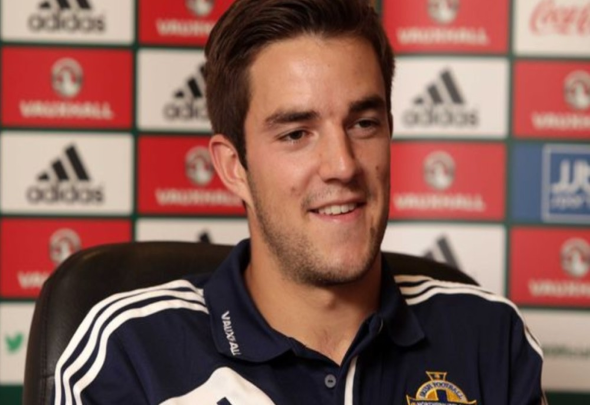 Rangers Academy coach Andy Little returned to first-team action with Stirling Albion on Saturday after spending ten months sidelined with a fractured skull – and Gers fans were delighted to see the former Ibrox striker back playing.
Little – who combines coaching at Auchenhowie with playing part-time with the Binos – is a popular figure with the Gers support after his time as a player at Ibrox.

10 frustrating months but finally back playing football yesterday! 🤕
Thank you to the manager, the board, fans, medical staff & all the lads at @Stirling_Albion. It seems rare to have that sort of decency, loyalty & support in football these days.
5 wins in a row – flying!🔴⚪️

The Northern Irishman spent eight years at Ibrox and scored 38 times in 89 appearances before heading south to join Preston North End in 2014.
Gers fans were delighted to see Little back in action after spending so much time out and even fearing his career could be prematurely brought to an end.
Here are some of their comments on Twitter:
https://twitter.com/LoyalBluenose86/status/967690556137771008

Brilliant news mate! Delighted for you and can only imagine how frustrating a time it’s been. All the very best for the rest of the season chief!

Ah this is wonderful!!! So damned proud of you mister!!!!! Xx

https://twitter.com/marco1873/status/967693828126838785
Little came off the bench in the 76th minute of the Bino’s win over Clyde at Forthbank and will be hoping to get some regular game-time under his belt before the end of the season.
During his time at Ibrox, Little lifted the Scottish Premiership, Scottish Third Division and Scottish League One titles as well as forcing his way into the senior Northern Ireland side and winning 9 caps for his country.
Little re-joined the Gers in  May 2017 as a part-time Academy coach alongside fellow ex-Rangers players Peter Lovenkrands, Steven Wright and Brian Gilmour.
In other Rangers news, Gers fans were blown away by this 28-year-old’s performance v Hearts
Don’t miss out on breaking and exclusive Rangers news by clicking here for our brilliant 24/7 updates on Facebook, Instagram and YouTube.