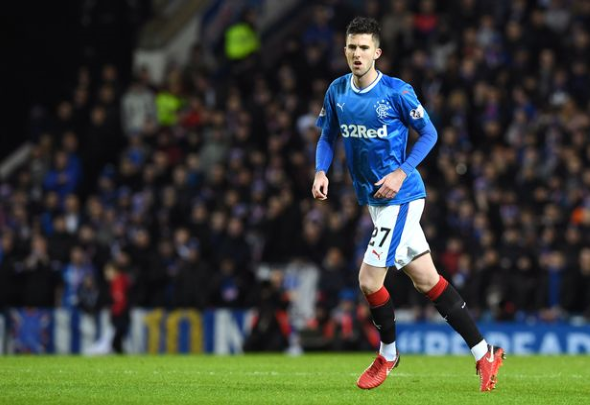 Rangers midfielder Sean Goss could be set to make a surprise switch and play international football for Northern Ireland after talks were held with manager Michael O’Neill, according to a report.

The Belfast Telegraph claims Goss could even be named in O’Neill’s squad for the friendly against South Korea this month and the end of season trip to Central America to face Panama and Costa Rica.

The German-born midfielder is yet to represent any country and it is understood he qualifies for Northern Ireland through the grandparent rule.

Goss joined the Gers from QPR in January and has been a standout for the Light Blues in central midfield alongside Greg Docherty.

The 22-year-old has scored twice since his arrival at Ibrox after netting free-kicks against Hibs and St. Johnstone.

Goss spent five years at Manchester United and made Louis van Gaal’s first team squad at Old Trafford but only featured in a pre-season friendly against Paris St Germain in 2015 on a US Tour before joining QPR in January 2017.

After six appearances at Loftus Road, the midfielder fell out of favour with manager Ian Holloway and didn’t make a single appearance this season before his move to Scotland.

Goss would be a fantastic addition to the Northern Irish ranks and having Ibrox assistant manager Jimmy Nicholl also serving as Michael O’Neill’s number two he’ll almost certainly have someone putting over how good international football could be for the 22-year-old. Goss has already shown in his brief time at Ibrox he has all the tools to be a quality footballer and taking the step to international level should help Goss continue his growth and make him a better player. After never making an appearance for England or Germany at youth level it looks unlikely he’ll ever get the senior call for either so taking the chance to play for Northern Ireland would be a good move.