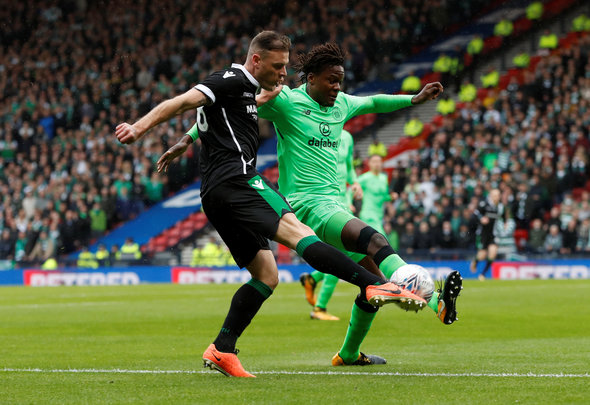 Rangers face Celtic on Sunday afternoon looking to book their place against Motherwell in the Scottish Cup final – and Graeme Murty must tell his side to target Hoops weak-link Dedryck Boyata if they are to pick up a win.

The Belgian defender has come in for criticism from Celtic fans for his performance and shipped a goal in the recent meeting between the two sides at Ibrox as Josh Windass stole the ball from the central defender before firing beyond Scott Bain.

With Alfredo Morelos not shy about getting in defender’s faces, Murty must tell the 21-year-old to try to noise up the Belgian and look to exploit any mistakes from the defender.

The Gers haven’t won in nine attempts against the Hoops – the longest run in history – and need to be at their very best at Hampden if they are to secure a win over their bitter rivals and end their hopes of winning a historic back-to-back treble.

If the Gers can get in at Boyata and force the Belgian to make one his now characteristic mistakes, Murty’s side need to manage the game better than last time the two met and record a first Old Firm win since triumphing on penalties at the same stage of the Scottish Cup in 2016.