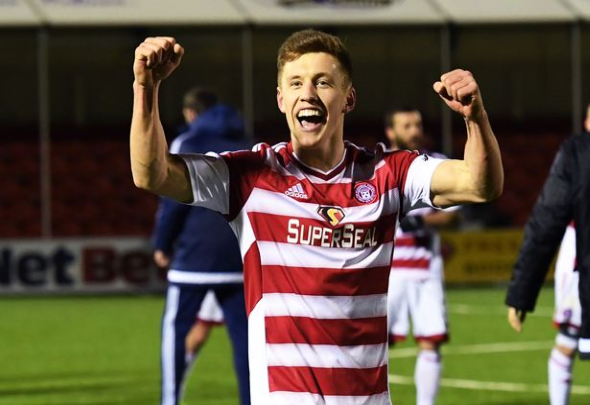 COMMENT
Hamilton midfielder Greg Docherty was reportedly the subject to a rejected bid from Rangers earlier this week – and if the Gers want to bring the 21-year-old to Ibrox they should leave him where he is until the summer.
Gers boss Graeme Murty confirmed he had made an approach for the Scotland Under-21 international but with a wealth of options available in midfield it would perhaps be best if the midfielder continued to get regular games before moving to Ibrox.
If Rangers are willing to allow the midfielder to remain with Hamilton until the end of the season on loan, it could maybe even knock a few quid off the asking price Hamilton are demanding for the Scotland Under-21 international.
At 21, Docherty has already played over 100 games at club level and is more experienced than your ‘average’ 21-year-old pro – Sean Goss has made 6 senior appearances to date – but Docherty isn’t guaranteed a regular start if he moves to Ibrox this month and playing every week for Accies would arguably help him improve quicker.
Unless the Gers are going to get a number of midfielders out the door – when everyone is fit Murty has Jordan Rossiter, Niko Kranjcar, Ryan Jack, Jason Holt, Andy Halliday, Graham Dorrans, Jamie Barjonas and Ross McCrorie all competing for a starting place in central midfield – then Docherty could get lost in the shuffle at Ibrox over the next few months.
In other Rangers news, this £50,000-a-week forward eager to move to Ibrox is within 48 hours of a switch.
We’ve launched a << BREAKING NEWS FEED>> exclusively for your club. ‘Like Us’ on Facebook by clicking here if you want 24/7 updates on all Rangers breaking news