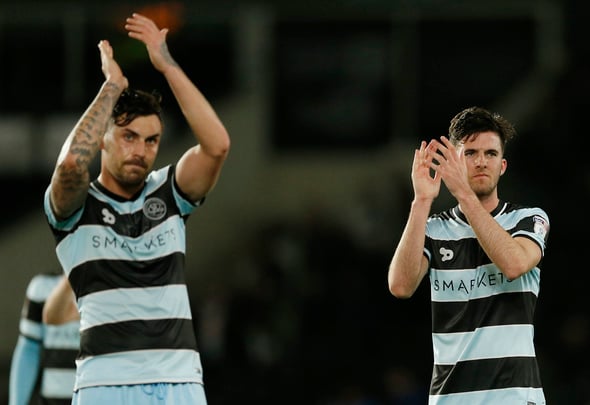 New Rangers signing Sean Goss has revealed the four iconic names who he credits with helping his development as a young player at Manchester United.
Goss spent five years at Old Trafford before heading for QPR in search of first-team football but revealed learning at the feet of Paul Scholes, Nicky Butt, Michael Carrick and Bastian Schweinsteiger has helped him improve.
The German-born midfielder joined United from Exeter City but never made a his competitive debut for the Red Devils before heading for Loftus Road 12 months ago in a £500,000 deal.
Goss admitted that despite being in “awe” of the likes of Carrick and Schweinsteiger he quickly wanted to take their place in United’s starting XI.
“When I joined the club right away I was working with Scholes and Nicky Butt who were my coaches at Under-19 level,” Goss said, as quoted by the Daily Record.
“Then when I moved up to the first team I got great help from Carrick and Schweinsteiger.
“That’s four unbelievable names who have helped in my development as a player.
“When I first walked in I was in awe of these guys. They were my heroes but that soon changes and you want to take their place.”
The 22-year-old has been compared with Michael Carrick previously and will be hoping to use his six-month loan spell in Scotland to prove to QPR boss Ian Holloway that he’s worthy of a regular first-team spot at Loftus Road.
Goss has made a handful of appearances for QPR since his move last January but hasn’t appeared for the first-team this season.
Carrick is expected to leave Old Trafford in the summer when his contract ends after 12 years with Manchester United while German legend Schweinsteiger left Manchester last year to join MLS side Chicago Fire.
In other Rangers transfer news, the club are working on beating Celtic to the signing of a 22-year-old goal machine ripping up the league.
We’ve launched a << BREAKING NEWS FEED>> exclusively for your club. ‘Like Us’ on Facebook by clicking here if you want 24/7 updates on all Rangers breaking news.