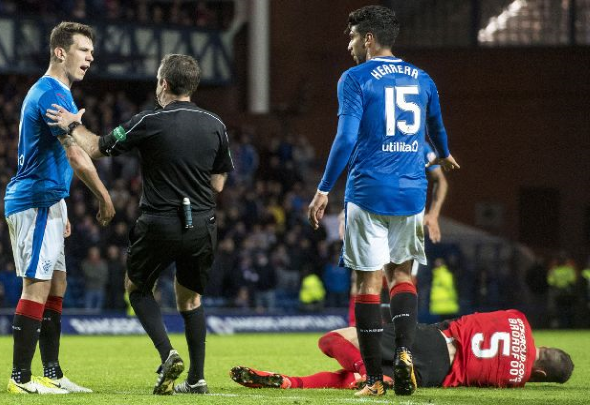 Rangers midfielder Ryan Jack admits he didn’t sleep after the calamitous three minutes against Kilmarnock which saw the Gers win a penalty, have Jack sent off, miss said penalty then concede an injury-time equaliser.

The Ibrox draw with Kilmarnock proved to be the final nail in Pedro Caixinha’s Rangers career with the 46-year-old Portuguese coach sacked less than 24 hours later.

Jack’s red card was later rescinded by the Scottish FA – the second one he has had wiped so far this term – and the midfielder was free to take his place in the side in interim boss Graeme Murty’s two games in charge so far.

The 25-year-old admits it was hard for him to get any shut-eye after the game but insists Rangers need to move on after Caixinha’s sacking.

“It was one of those nights when I went back home and lay on my bed without getting any sleep because you can’t quite believe what happened,” Jack said, as quoted by The Scotsman website.

He added: “There’s no denying it’s been eventful for me at Rangers so far, especially with the change of manager.

“It’s never nice to see anyone lose their job and Pedro was the man who brought me to the club.

“But that’s football and now it’s just about looking forward.”

Jack has been a mainstay since moving to Ibrox after 17 years with Aberdeen.

The former Aberdeen captain has been a constant feature in the heart of Rangers’ midfield under both Caixinha and Murty and will be hoping to continue that under whoever ultimately replaces the Portuguese.

Jack’s former manager at Aberdeen, Derek McInnes, is the bookies’ favourite to take over from Caixinha after leading the Dons to three consecutive second-place finishes in the Scottish Premiership and lifting the club’s first trophy in 20 years when they won the 2015 Scottish League Cup.

In other Rangers news, an Ibrox legend was delighted to see Kenny Miller back in the starting XI.