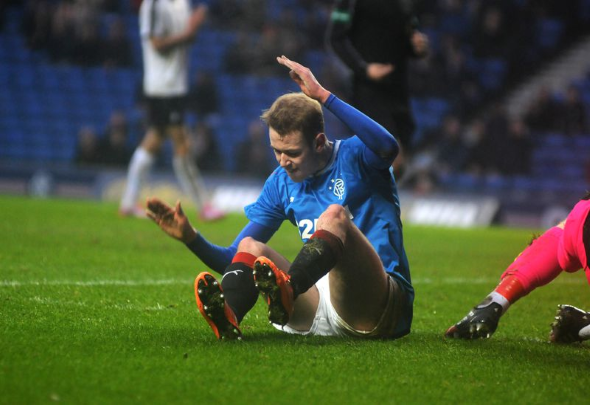 Rangers striker Zak Rudden has revealed he has been working with Gers legend Peter Lovenkrands to improve as a striker – and admitted that he hopes to break into Steven Gerrard’s first-team squad this season.

Rudden has been prolific for the Gers’ Under-20s over the last two seasons as he works his way through the sytem at Ibrox and the teenager has impressed for club and country.

The 18-year-old also admitted that Lovenkrands has been almost like a “dedicated forward coach” with him as he looks to make his mark.

“I hope to make my debut for the first team and be around the first team more,” Rudden said during a Twitter Q&A with the club’s youth development company.

“I work on my game and my finishing with Peter Lovenkrands; it’s great to almost have a dedicated forward coach. To have him is so helpful

I work on my game and my finishing with @lovenkrands11 it’s great to almost have a dedicated forward coach. To have him is so helpful https://t.co/93TxbJ2hPg

Rudden is a really exciting young player who has a fantastic chance to make a massive name for himself at Ibrox. Despite only being 18, Rudden has been a standout in the Under-20s in the last few years and has a fantastic physical presence in the penalty area. The striker gets wound-up a bit too easily at times but as he matures he has all the attributes to be a key player for the Gers and the chance to get some first-team football would be well deserved. Working with Peter Lovenkrands will be a huge benefit to him and having someone who played in the Premier League, Bundesliga and Champions League helping him out will make Rudden a far better player. If Rudden was given a chance in the first-team by Gerrard, the teenager wouldn’t be shy in going out and trying to get his name on the scoresheet and noise up opposition defenders.