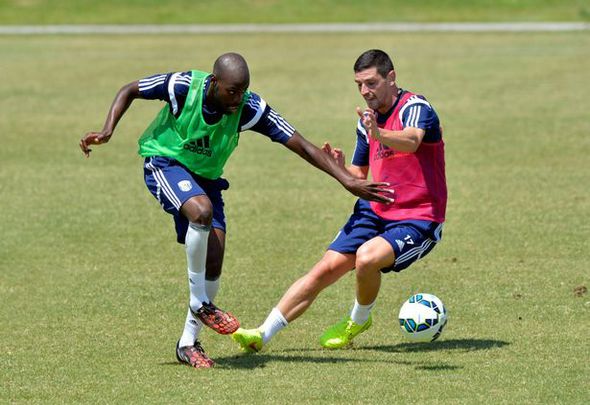 Rangers will most definitely have the upper-hand over Celtic as the two Old Firm rivals reportedly eye up a summer swoop for Kilmarnock midfielder Youssouf Mulumbu.

The Daily Mail has reported that the two Glasgow giants may do battle over the free transfer of Mulumbu, 31, after Killie manager Steve Clarke admitted that it will be hard to make him stay at Rugby Park once his contract expires at the end of the season.

Aberdeen and Hibernian were also said to be interested in the former DR Congo international, but out of all four clubs interested in him, Rangers will definitely be in pole position because of the midfielder’s friendship with Graham Dorrans.

Mulumbu and Dorrans both emerged into the West Brom first-team around the same time as each other as the Black Country club earned promotion from the Championship in 2009/10 and continued to play side-by-side at The Hawthorns for the next five years.

In 2015, the midfield pair both signed for Norwich before going their separate ways at the end of last season and eventually finding themselves in different teams in the Scottish Premiership.

In his time at West Brom, Mulumbu was also surrounded by other Rangers supporters in Chris Brunt and James Morrison who would have no doubt fed him pro-Ibrox propaganda.

Recently, the Congolese midfielder also took to Twitter to poke fun at his old mate Dorrans for not including him in a team of the best players he’s ever played alongside.

Mulumbu always struck as someone who loved to form relationships with fans and team-mates in his time at West Brom.

He will also surely look at how little chance he would have of breaking into Celtic’s first-team plans with the likes of Scott Brown, Olivier Ntcham, Stuart Armstrong flooding Brendan Rodgers’ side with international talent.

Mulumbu had spent the last few years in the doldrums at West Brom and Norwich and there’s no way he would want to slip back into obscurity by warming the bench at Parkhead.