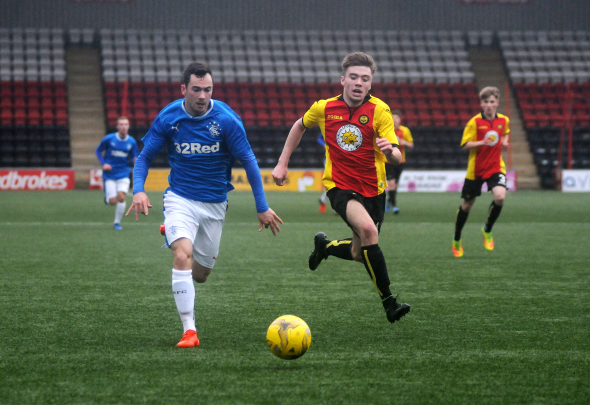 Versatile Rangers youngster Ross Lyon has agreed a temporary move away from Ibrox after signing a development loan with League One side Stranraer.
Lyon, who can play in a number of positions across the pitch, will still be available for the Gers’ Under-20s side if needed between now and the end of the season.
The deal was confirmed by the Gers’ Academy on their official Twitter account on Saturday morning.

📝 Ross Lyon has joined Stranraer on loan until the end of the season. https://t.co/p99TYi2ABp

Lyon has yet to make his first-team debut for the Gers but has been an unused substitute in the past for the Ibrox side.
After making the move official, Lyon was named on the bench for his new side as they take on Queen’s Park at Hampden.
The 19-year-old right-back was a key part of Graeme Murty’s Under-20’s squad last season as they reached the Scottish FA Youth Cup final against Old Firm rivals Celtic.
Lyon can play down either flank as a winger of full-back and in a number of more central roles.
Lyon has been with the Ibrox side since he was seven years old as he works his way through the club’s youth programme and looks to make the first-team squad.
Lyon joins a number of other Academy hopefuls at Ibrox to have gone out on loan this season for regular first-team football as they continue their development under Academy chief Craig Mulholland.
In other Rangers transfer news, Rangers are battling a Championship club for the signature of this 12-goal striker.
We’ve launched a << BREAKING NEWS FEED>> exclusively for your club. ‘Like Us’ on Facebook by clicking here if you want 24/7 updates on all Rangers breaking news.