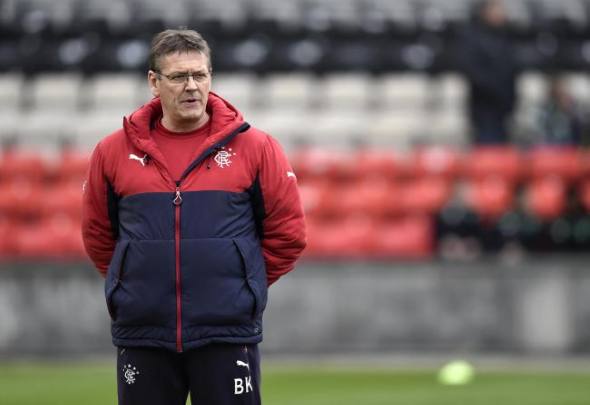 Rangers Under-20s boss Billy Kirkwood thinks that the Gers’ season-long Games Programme will stand the Light Blues youngsters in good stead as their season came to an end with a 3-1 defeat at the hands of Burnley on Sunday.

The Gers have faced some of the best youth sides across Europe this season instead of taking part in the SPFL’s Development League with the young Gers picking up wins away to the likes of Valencia and Bayern Munich.

Kirkwood insists results aren’t the most important thing but getting the Light Blues young players prepared for first-team football – and hopes to get to see some of them in the senior side soon under new manager Steven Gerrard.

“It’s been a great season. We’ve had some great trips and some fantastic results against Valencia and Bayern Munich away. Some great trips and performances and as I say Leicester last week was fantastic for everybody,” Kirkwood said, as quoted by the Gers’ official website.

“We’ve had a few dunts. Liverpool came here and gave us a hard time of it and today was hard too. But sometimes you learn more as a player and as a coach as well when you come up against it and lose. It’s how they react to it and how they take that forward.

“It’s not all about winning all the time in terms of making it easy for the kids. We need to test them and that’s what we have done with the Games Programme, so it’s worked out well and I’m sure that’ll stand them in good stead.

“There’s things in the pipeline [for next season]. There will be some of these games continuing, there will be a reserve league and it’s changing to Under-18s. There will be a lot of changes but hopefully we can progress these lads to the first-team with the new manager coming along and seeing them under his nose and hopefully trotting out in front of a full crowd.”

The Games Programme was an ambitious step by the Gers but seems to have had the effect the Light Blues hierarchy had hoped it would. Next season will be a good gauge of how far the youngsters have come on as some of them make the step up to being regular members of the first-team squad. Travelling across Europe and playing in new environments and differing climates will help prepare the Gers’ kids for continental football as they progress in their careers as well as allowing them to test themselves against some of the next generation of elite superstars. As the Gers return to the domestic system next term with the introduction of a reserve league, the Ibrox giants must now adapt how they are structuring things to fit within the SPFL’s framework and produce the highest quality of players possible. Hopefully the Gers can find a way to implement more regular games against foreign opposition.</em