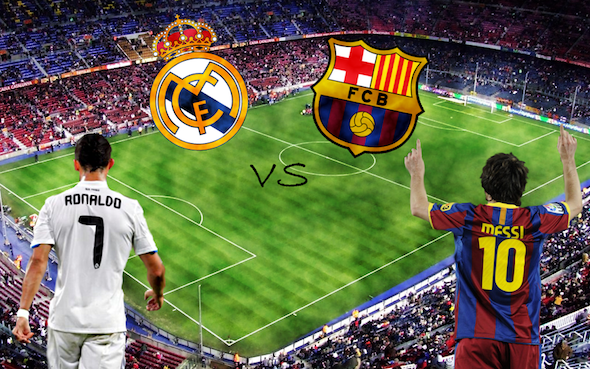 Real Madrid might be able to keep Barcelona at bay for a half, but Tobias Gourlay fancies the visitors to ramp up the pressure on the Real Madrid coach…
Thinking about a bet on Spanish football for the first time? CLICK HERE for Football Insider’s latest betting offers
Real Madrid v Barcelona
Saturday 17:15 (Live on Sky Sports 2)
Real 2.56, Barcelona 2.86, The Draw 3.75
Match Odds
Two questions dominate the buildup to this weekend’s big game at the Bernabeu: will top-of-the-table Barcelona have Lionel Messi at their disposal? And how will second-placed Real Madrid approach Rafa Benitez’s first clasico?
We won’t have a firm answer to the first question until Luis Enrique hands in his team-sheet on Saturday afternoon. In the meantime, speculation isn’t very helpful to us.
The second question demands more consideration. Having lost his unbeaten record at Sevilla a fortnight ago, Benitez is under extra pressure not to lose this game. This could encourage him to follow his natural defensive instinct.
Since he arrived at the club in the summer, Real’s improvements have mostly come in their own half of the pitch. Goalkeeper Keylor Navas (a slight doubt for this game), centre-back Raphael Varane and defensive midfielder Casemiro all look much more assured than they did a year ago. As a result, Real have conceded just once in five Liga outings at the Bernabeu. Benitez might well play to this newfound strength on Saturday.
Upfront, Gareth Bale looks at ease with the new boss, but Karim Benzema, James Rodriguez and Cristiano Ronaldo have all hinted that he is a downgrade on his more laid back predecessor, Carlo Ancelotti.
With or without Messi, Barcelona have not looked entirely convincing either. They’ve visited four other teams currently in La Liga’s top 10 and come away with an even W2-D0-L2 record.
At these prices, we’d still go with the visitors. Benitez’s Real are unproven at Bernabeu against strong opposition (their five previous opponents are all now in the bottom half) and Barcelona know how to win here. The Catalans have won this Liga fixture in four of the last seven seasons; and across all competitions they are W6-D3-L3 on enemy territory.
Our real focus, however, is on what the state of play might be at 45 minutes.
Half Time
There is a trend here that pre-dates Benitez, but one that he looks well equipped to uphold.
In La Liga, 7/9 clasicos have been all square at half-time. Five of those games were 1-1, which could be beyond 7.00 in the Half Time Score market by kick-off. We want some cover for a Benitez-inspired 0-0, and are quite happy with a price of 2.60 for this one to be level at the break too.
If you do fancy Barca to escape the capital with all three points, the Draw/Barcelona double result should be on offer at a plump 8.00.
Over / Under Goals
It’s more than four years since el clasico saw a clean sheet. Since Victor Valdes kept Real out in a 2011 Champions League semi-final, Spain’s Big Two have clashed 18 times in all competitions and both of them have scored in all 18 encounters.
Sixteen of the 18 delivered Over 2.5 Goals in total and half of them (9/18) reached Over 3.5 Goals.
Exact Total Goals
Rather than leave our goals bet open-ended, we prefer to do something a little more precise. Thirteen of those 18 games have finished with exactly three or four goals. Both of those outcomes should become available at around 5.00 in the Exact Total Goals market.
Assuming that happens, back them both to a level payout and, if one of them is correct, you’ll be paid out at around 2.50.
To Score
Who might get those goals?
Cristiano Ronaldo leads this market, but he seems unhappy under Benitez and his form is inconsistent. The Portuguese has scored in just 6/15 Liga and Champions League appearances this season, yet he could still be odds-on to find a way past Real’s toughest opponent yet.
He’s been away for almost two months, but Messi will go off around 2.30 if he starts. At that price, we’d like to know a bit more about his match fitness before diving in. Even excluding the Las Palmas game in which he got injured, the Argentinean has scored in only 2/6 Liga and Champions League appearances this season.
In Messi’s absence, Neymar (nine) and Luis Suarez (eight) have combined to score all of Barca’s last 17 goals. Both are undoubtedly in fine form, but we won’t be making any moves until we know the starting lineup on Saturday.
If Messi’s left out, consider backing Neymar and Suarez to level stakes. At odds-against prices, you’ll make a small profit even if just one of them finds the back of the net.
Best Bet
Back Half Time Draw @ 2.60
Recommended Bets
Back Three & Four Exact Total Goals @ 2.50 (combined)
Back Draw / Barcelona @ 8.00
Thinking about a bet on Spanish football for the first time? CLICK HERE for Football Insider’s latest betting offers