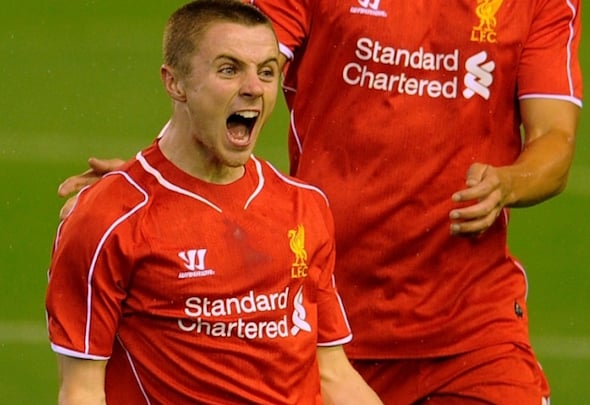 Ahead of Liverpool’s clash against Middlesbrough in the Premier League on Wednesday evening, Football Insider takes a look at the last time the two sides met in the third round of the League Cup at Anfield in 2014.

It’s been over two years since the two teams went head-to-head but it was certainly a memorable encounter when Liverpool edged past Middlesbrough in record-breaking fashion.

A penalty shoot-out consisting of 30 spot kicks was the joint-highest scoring penalty shootout in English football history and it ended in a victory for the home side in front of the Kop.

Brendan Rodgers fielded a weakened team for the cup fixture, naming two youngsters on the team sheet for their competitive debuts, Jordan Williams and Jordan Rossiter.

Rossiter marked his debut with a goal after just 10 minutes and Liverpool went into the half-time break a goal up a looking fairly comfortable.

Rickie Lambert captained the side that day, replacing Mario Balotelli in the starting line-up but he failed to get on the score-sheet.

Instead, it was 21-year-old Suso who scored his first goal for Liverpool in extra-time to put the Reds back in front after Adam Reach had scored an equaliser for Boro in the 62nd minute.

The Reds failed to see out a win in extra-time despite remaining dominant when Kolo Toure conceded a 120th minute penalty, which Patrick Bamford converted.

Liverpool eventually won 14-13 in the penalty shoot-out and though it was an entertaining fixture, Jurgen Klopp will certainly be hoping his side can wrap up an Anfield win in much easier circumstances on Wednesday evening.

In other Liverpool news, Klopp delivered this injury update on Marko Grujic.