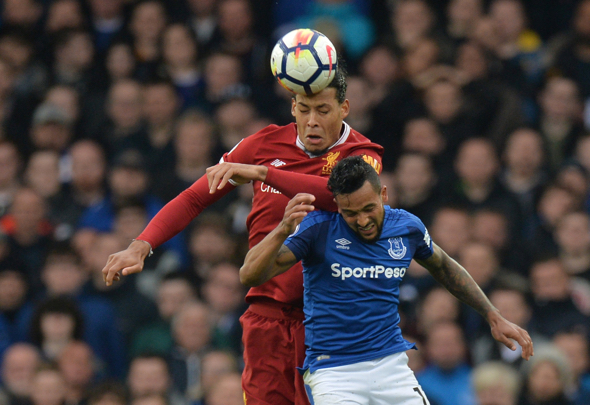 Jamie Redknapp has slammed Theo Walcott in the Daily Mail for “hiding” during Everton’s goalless draw against Liverpool in Saturday’s Merseyside derby.

The Sky Sports pundit was deeply unimpressed by the performance of the England international, 29, during the dreary clash at Goodison Park.

Yannick Bolasie was heavily criticised by home supporters for his distribution but Redknapp has claimed in the Mail that they should have been pointing the finger at his teammate instead.

“Watching the Merseyside derby, Yannick Bolasie was turned into a scapegoat. The fans were furious whenever he gave the ball away. For me, they were picking on the wrong guy.

“On the other wing, Theo Walcott was hiding. Ragnar Klavan was Liverpool’s left back and there for the taking, but Walcott barely tried to take him on. That is not the personality of an Everton player. The Goodison Park faithful have always enjoyed having exciting wide men and Sam Allardyce has to get more out of his.”

Redknapp has become a strident critic as the years has gone by, and his verdict on Walcott is a harsh one. Is it true? Well, yes, it actually is. The January signing did little of note against Liverpool and was far too happy to take the easy option each time, rather than try and roast Klavan, whose lack of mobility as well as experience of the left-back position made him the home side’s potential weak link. That the 32-year-old was able to cope so easily with Walcott was a damning indictment of the former Arsenal man, whose confidence appears shot following a horrible season in which he has scored just two Premier League goals.

In other Everton news, Farhad Moshiri is set to rip up the £115,000-a-week contract of Goodison senior ace who only joined this season.