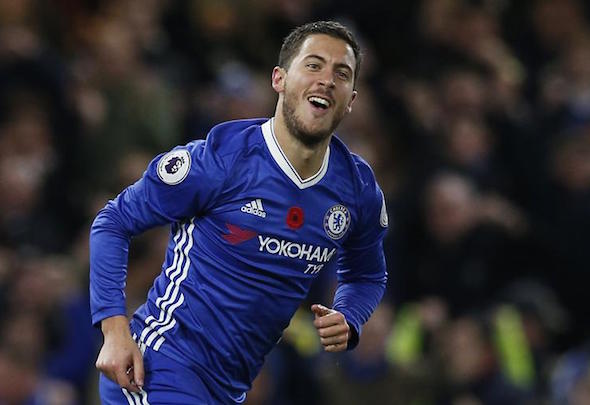 Harry Redknapp believes that Tottenham should play with a three-man defence to nullify the threat of Chelsea talisman Eden Hazard.

The 26-year-old has been in sensational form for the Blues this season and has been shortlisted for the PFA Player of the Year award.

The Belgian playmaker has scored 14 goals and supplied six assists in 35 appearances this campaign, while dazzling opponents with his trickery.

However, he endured a frustrating match on Sunday as he was man-marked out of the game by Manchester United’s Ander Herrera in the 2-0 defeat.

Spurs also managed to keep Hazard quiet when they beat their London rivals 2-0 in January as they matched up Chelsea’s 3-4-3 formation, something they have used frequently throughout the season.

Ex-Spurs manager Redknapp, who was recently appointed the new boss at Birmingham, feels that his former side would be best served matching up Chelsea’s system to nullify Hazard.

“The key is keeping Eden Hazard under wraps like United did,” Redknapp wrote in the Evening Standard. “Spurs have the option of man-marking him like Ander Herrera did or they could match up with three at the back as earlier in the season — I’d look to do that if I was in charge.”

Hazard will be hoping he can inspire Chelsea to an FA Cup final, but they must get past the in-form team in the Premier League.

Spurs will be desperate to get one over their rivals and move a step closer to cup glory, but they are also competing with the Blues for the Premier League title.

Pochettino’s side are now just four points adrift of league leaders Chelsea and have managed to set up a nervous title race.

In other Tottenham news, Alan Shearer has raged on Twitter at the exclusion of the club’s ace from the PFA team of the year.