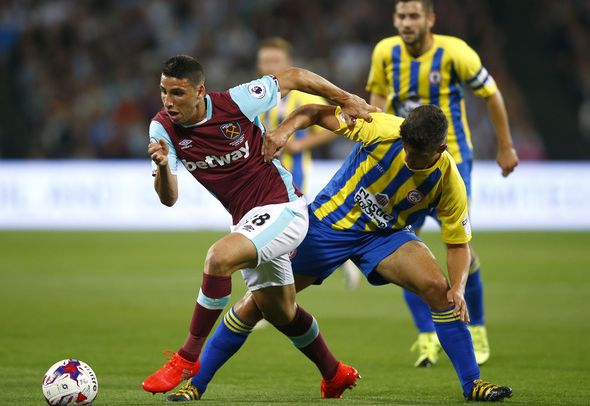 West Ham flop Jonathan Calleri is headed for the exit this month – according to a reliable journalist.

Calleri signed for the Hammers on loan in the summer, but has produced a goalless return from 11 appearances in all competitions during the first-half of the campaign.

The 23-year-old is expected to have his loan deal terminated this month, where he will end his Premier League nightmare and return to parent club Deportivo Maldonado in Argentina.

Ed Aarons, deputy sports news editor for The Guardian, revealed on Twitter that Calleri had been attracting interest from several teams in Spain and Italy, although the identities of those teams is unclear.

Told Jonathan Calleri has interest from several teams in Spain and Italy. Striker expected to leave West Ham this month

One of the teams from Spain, however, looks likely to be Las Palmas, with the Mirror reporting on Tuesday that the La Liga side were hoping to land Calleri on a loan-to-buy deal.

Calleri has not even featured for the Hammers since the end of October and hasn’t been part of the matchday squad in any of their last nine games, as Slaven Bilic appears to have made up his mind on the striker.

While he has not yet featured for Argentina at senior level, Calleri was part of the U23 squad that was eliminated at the group-stage in the 2016 Summer Olympic games in Rio de Janeiro.

Bilic looks set to part with Calleri and another of his striker flops, Simone Zaza, this month, and has already made progress in landing a replacement.

Jermain Defoe, Moussa Dembele, Michy Batshuayi and Scott Hogan have all been subject to interest by the Hammers, as they seek to land a new goalscorer.

The signing of Jonathan Calleri just hasn’t worked out for Slaven Bilic and West Ham, and quite frankly, the sooner he leaves the club, the better. The striker hasn’t scored any goals, and his failure to offer much improvement to West Ham’s miserable start to the campaign saw him discarded from the setup as early as October. Bilic likely still only has him on-board in case a sudden injury crisis leaves him short of options. Several clubs appear to be keen on ending his West Ham nightmare, and the Hammers will be delighted. It’s time to move.

In other West Ham transfer news, the Hammers have lodged an improved bid to land Robert Snodgrass from Hull.