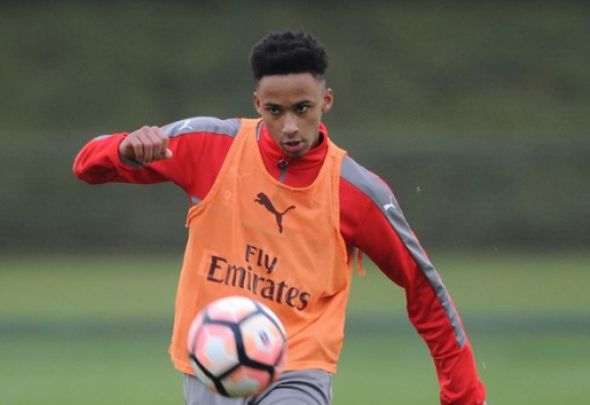 Cohen Bramall has been ruled out from making his senior Arsenal debut against Sutton on Monday night as he is cup-tied, a reliable journalist revealed.

Bramall, 20, signed for the north London outfit in January in a surprise move from Northern Premier League side Hednesford Town, but is yet make his debut.

Bleacher Report journalist Dean Jones revealed on his personal Twitter account that Bramall was set to make his Gunners debut, but is cup-tied after already playing in the FA Cup this term.

Cohen Bramall should have made Arsenal debut against Sutton but he has already played in the FA Cup… A qualifying game vs Belper Town!

Left-back Bramall’s ineligibility means that manager Arsene Wenger must decide between first-team defender Nacho Monreal and Kieran Gibbs to fill the void on the left side of defence.

Wenger is expected to ring the changes ahead of Monday night’s fifth-round cup tie against National League side Sutton, with the odds stacked firmly in Arsenal’s favour.

A win for the London side will see the Gunners progress into the last eight of the competition, with another non-league opponent awaiting them in Lincoln City.

The Gunners will be desperate to return to winning ways after their 5-1 demolition by Bayern Munich on Wednesday, as Wenger looks to hold aloft the FA Cup for the seventh time as Arsenal boss.

But defender Bramall will be made to wait for his first-team debut for the Gunners after making two appearances for Arsenal’s Under-23s side in Premier League 2.

In other Arsenal news, this 30-year-old attacker has been shortlisted by French outfit Marseille.