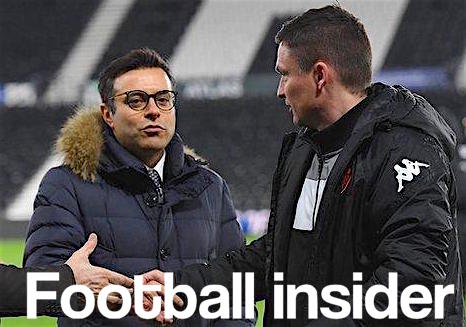 Paul Heckingbottom will now be having a feeling familiar to many Leeds United managers in recent years.

You know, that one where they’re called in for showdown talks with the owner or chief executive. The outcome for previous incumbents has usually been to walk away with their P45.

Garry Monk quit on his own terms, but others were not so fortunate, and the Elland Road managerial revolving door could be about to swing open once again again.

Sun correspondent Alan Nixon, who is a reliable source of transfer and manager news, claimed in an exchange with a United fan on social media on Tuesday that Heckingbottom was ordered to attend showdown Leeds talks on Monday.

His job status? It hangs in the balance.

Nixon explained that he is waiting on confirmation of the outcome of the discussions but his gut feeling is that the manager’s powerbase will be diminished and that director of football Victor Orta has got the nod to choose which players the club buy this summer. It is no surprise that Heckingbottom’s job is hanging by a thread, at least to this publication.

Football Insider revealed last month that the ex-Barnsley boss was likely to be axed at the end of what has been a wretched campaign for the club and a list of replacements had been drawn up.

Heckingbottom was appointed at the start of February but has proved to be a downgrade on predecessor Thomas Christiansen, not to mention Monk.

Sure, he could turn it round if he is given a pre-season to implement a playing style and assemble the squad to his own specifications.

But that appears unlikely, as Orta very much calls the transfer tune at Elland Road. The Spaniard’s recruitment has been as haphazard as Heckingbottom’s management, but, crucially, he has the trust of owner Andrea Radrizzani.

The same cannot be said for the Yorkshireman, and he would be best to brace himself for some bad news in the coming days.