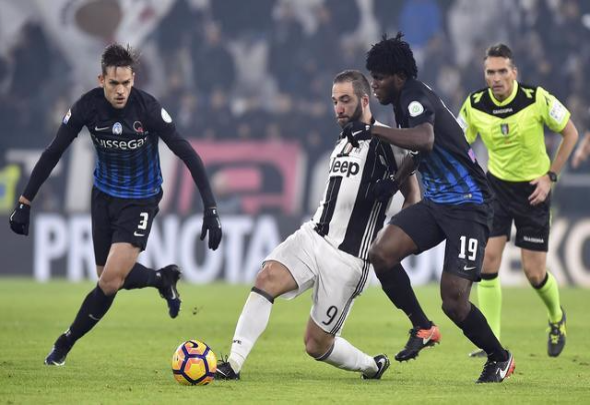 Everton are in talks with Atalanta over a possible deal for midfield enforcer Frank Kessie, according to a report.

Goal claim that no price has been agreed for the defensive minded player but the 20-year-old does want to make a move to the Premier League.

Kessie is currently on international duty with the Ivory Coast where he is taking part in the on-going Africa Cup of Nations.

It is said that his current club don’t want to lose him this month after they loaned Roberto Gagliardini to Inter but they are holding out for £30million for the player dubbed the next Yaya Toure.

However, interested parties Everton and Chelsea have valued the highly-rated youngster at £22million.

Kessie has played 17 games in all competitions this season for the Serie A club, scoring an impressive seven goals from midfield and supplying two assists.

It is also said that Manchester United are keeping tabs on the Italian-based player while Juventus have withdrawn their interest in him.

Frank Kessie is an unknown quantity and paying big bucks for a player that is still young would be a very big risk by the club. Steve Walsh is the head of recruitment at Goodison Park and has made a number of top signings during his time at Leicester. The Toffees could do with a more powerful player in the middle of the park, but with Idrissa Gueye and Morgan Schneiderlin already signed up, a move for the youngster may not be needed. Both Gueye and Schneiderlin can play that defensive role very well and with the emergence of Tom Davies backed up by senior duo Gareth Barry and James McCarthy, Koeman’s side shouldn’t be in too much of a rush to sign up Kessie. The best option for them could be to continue monitoring him before adding him to their ranks in the summer.

In other Everton transfer news, there has been a turning point in a deal for this forward after talks on Wednesday.