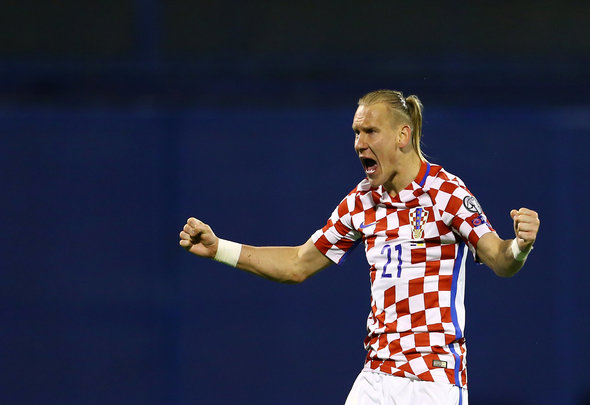 Everton are preparing to swoop for Croatian international Domagoj Vida when his contract expires at the end of the year, according to a report.

The transfer was first reported by Ukrainian journalist Valery Prigornitski on Facebook, with him stating Everton and AC Milan have “lucrative” offers ready for the player, and that an answer is expected imminently.

The 28-year-old’s current contract at Dynamo Kyiv expires on the last day of 2017, making him available on a free transfer as soon as January.

Vida has featured 18 times for Dynamo Kyiv this season, including four times in the Europa League and has scored two goals.

The centre back has won many domestic honours in his career including three league titles across his time at Dynamo Kyiv and Dinamo Zagreb.

The defender’s performances at club level have seen him win 55 caps for his country, Croatia, and he has managed to score two goals at international level.

The only blip in his career comes from when he spent a year at Bayer Leverkusen but was unable to win any sliverware, and was limited to only nine appearances for the club before being sold.

The Daily Mirror had previously reported that the Toffees were interested in Vida back in March.

Vida would be a more than welcome addition to the Everton squad given their defensive woes this season. The Toffees have the joint second worst goal difference in the league with -12, and centre backs Phil Jagielka and Michael Keane could do with some competition for their places. Also as the defender would be available for a free in January, the risk is minimal due to the lack of outlay, so Everton would still have the finances to strengthen other areas of the team. While there’s question marks over his terrible spell in the Bundesliga, you don’t win 55 international caps for your country for no reason.

In other Everton transfer news, Istanbul giants Fenerbahce plot a move for an Everton flop.