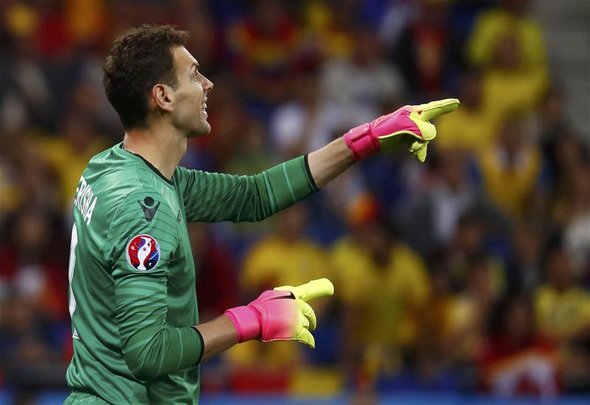 Everton are eyeing a move for Albania goalkeeper Etrit Berisha, according to reports.

Read Aston Villa citing La Lazio Siamo Noi claim that the Lazio keeper has emerged as a target for the Toffees, who are currently in the market for a replacement for the departed Tim Howard, who left for the Colorado Rapids earlier this summer.

The move could represent the third of three goalkeeping arrivals this summer after they completed the signing of  Maarten Stekelenburg from Fulham and 18-year-old Chris Renshaw from Oldham.

Koeman has signed Stekelenburg on a three-year deal and the 33-year-old will know his new Dutch manager well; having worked under the 53-year-old at various clubs before, including spending last season on loan at Southampton as cover for the injured Fraser Forster.

BREAKING: We have signed goalkeeper Maarten Stekelenburg from @Fulhamfc on a three-year contract. #WelcomeMaarten pic.twitter.com/CLXuHhH51l

The report says that the Lazio player Berisha is currently battling for number one spot at his current club and if he is not chosen to be the club’s first-choice keeper, he may leave for the Merseyside outfit this summer.

The 6ft 4in player is entering into the final year of his contract in Italy and having only made 20 appearances in all competitions in the 2015-16 season, could see the vacancy between the sticks for Everton as an answer to his problems.

New Aston Villa boss Roberto Di Matteo is also reportedly interested in the 27-year-old but Berisha may opt for Premier League football next season ahead of competing in England’s second tier.

In other Everton news, Pat Nevin believes that the Toffees are not far away from becoming a massive club once again in the Premier League.