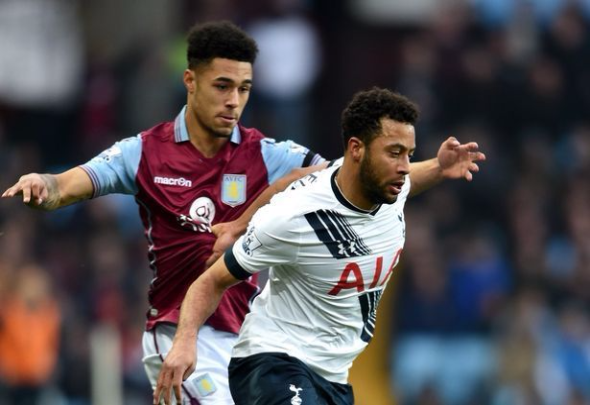 The Birmingham Mail claim that the attacking trio of Green, Davis and McKirdy are attracting interest as Villa could let them make a move before the January transfer window shuts.

It is also said midfielder Calder is being closely monitored and could be on the move again, while a decision is yet to be made on centre-back Kevin Toner.

Calder recently returned from a loan spell at Doncaster where he made 16 appearances in all competitions for the League Two club.

Meanwhile, Toner was plying his trade in League One for Midlands outfit Walsall where he played 16 games in all competitions.

It is said League One and Two clubs have sent scouts to watch both Green and Davis play, while playmaker Mckirdy was checked out during his loan spell at Stevenage.

Green and Davis both featured for Steve Bruce’s side during their FA Cup defeat to Tottenham at the weekend – the latter making his senior debut.

However, it is claimed by the Birmingham Mail that Bruce, who is an admirer of the duo, is likely to keep them on board for now as the Championship side are short on forwards.

Only, Ross McCormack and Gabby Agbonlahor are the recognised senior attackers at the club, with Jonathan Kodjia and Jordan Ayew away at the Africa Cup of Nations.

Additionally, they also sold target-man Rudy Gestede to Premier League side Middlesbrough as Agbonlahor and McCormack have been utilised in a forward role during Bruce’s last two defeats.

Steve Bruce must press on with the idea of loaning out his most talented players, but he must keep hold of a few. Andre Green and Kevin Toner could be utilised this season as they both can provide attacking and defensive cover to the team respectively. Even when Jonathan Kodjia and Jordan Ayew return to the side, left-winger Green should be given a chance in the first-team. Furthermore, centre-back Toner should be used as a backup to senior trio James Chester, Tommy Elphick and Nathan Baker, in particular, the latter who has a history of injury problems. Other than that, Harry McKirdy, Keinan Davis and Riccardo Calder should be allowed to continue their development in the lower leagues.

In other Aston Villa transfer news, talks have reportedly been held with this £24,000-a-week player.