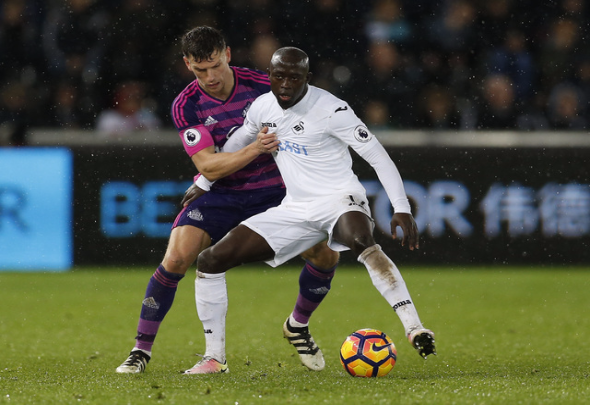 Leeds are in a big-money chase to sign Swansea winger Modou Barrow, according to a report.

The Sun has claimed that the Yorkshire giants have targeted the 24-year-old as a possible signing alongside Southampton, Newcastle and Aston Villa, while there is also interest from China.

But, it is believed that the Swans want as much as £7million upfront to seal a deal for their man, which could price out some second tier clubs.

Additionally, the Welsh club are looking for add-ons to make the transfer exceed £8million for a player they are looking to sell to trim their squad.

Barrow has been used sparingly this season and last played for Swansea on New Years Eve in their 3-0 defeat against Bournemouth.

He has played 20 times in all competitions in total with many appearances coming from the bench and he has a return of just three assists.

He initially made the move to the Premier League side in 2014, meaning he just missed out on playing with Leeds manager Garry Monk, as he departed from the club the same summer.

Barrow is a natural right winger, but he can also play on the left and Monk may be looking to bolster his wing options with Hadi Sacko, Souleymane Doukara and Stuart Dallas currently occupying the positions.

If Leeds were to sign Barrow then they would be left with a very similar player to that of Sacko. The Gambia international is very much all about his pace with little end delivery coming from him. At 24 there is still a feeling that he has not yet become the player he can be,  but £7million upfront with add-ons is very steep, especially for a club such as Leeds. The Yorkshire giants have had money problems in the past and they should avoid falling into a similar trap as they sit on the brink of promotion. Therefore, at this price tag Leeds should avoid signing him, but if a loan deal with an option to buy in the summer became available they should look to explore it.

In other Leeds transfer news, Mick McCarthy has issued an emphatic response to the club after midfielder interest.