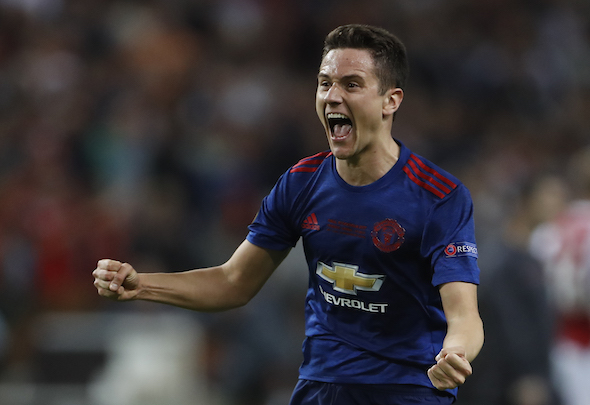 Manchester United midfielder Ander Herrera is set to put pen to paper on a brand new deal with the club, according to a report.

The Manchester Evening News claims that the 28-year-old is expected to commit his long-term future at Old Trafford “within the next two-and-a-half months”.

The newspaper reports that although the Spaniard is in no rush to sign a new contract, he is completely relaxed about the situation because he is “very happy” in Manchester.

The report claims that United boss Jose Mourinho has already suggested that the midfielder will extend his stay and Herrera is reportedly set to receive improved terms following his fantastic performances last season.

The Spain international became an integral member of the first-team in Mourinho’s first campaign in charge at the club, contributing with two goals and eleven assists in 50 appearances.

The midfielder’s contributions saw the fans elect him as the club’s Player of the Year in only his third season at Old Trafford.

Following the arrival of Nemanja Matic from Premier League champions Chelsea, Herrera has only made two starts for the Red Devils this season.

Herrera’s current contract with United runs out next summer.

United fans will be delighted to hear that the club are looking to extend Herrera’s stay at Old Trafford. The Spaniard has become a firm favourite amongst the fans due to his work-rate and quality on the pitch not to mention the way he passionately speaks about the club off the field. Although the midfielder has spent the majority of the campaign watching on from the sidelines, he is likely to become a regular for the first-team in the upcoming weeks with Paul Pogba out of contention for a lengthy period of time. With United set to challenge on all fronts this season, Herrera is surely set for more minutes on the pitch as he’ll look to stake a claim to be selected for the Spain national team for next year’s World Cup.