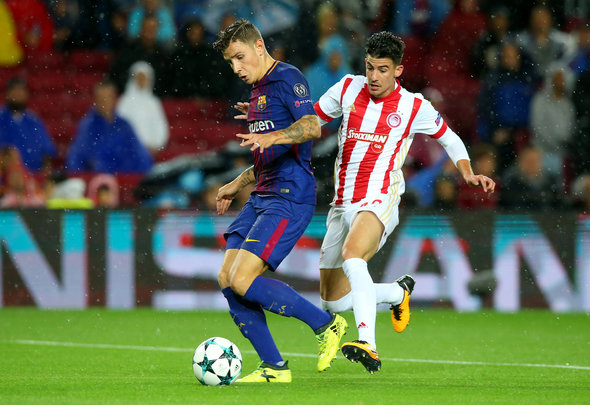 Newcastle United scouts were in attendance to watch Olympiakos attacker Athanasios Androutsos in their Champions League clash with Barcelona, according to a report.

Greek football website contra.gr claim that the Magpies kept a close eye on the 20-year-old winger alongside Premier League rivals Everton and European clubs such as Sapdoria, Wolfsburg and Villareal.

Androutsos played the full 90 minutes as Olympiakos fell to a 3-1 defeat at the Nou Camp on Wednesday, despite Barcelona defender Gerard Pique being sent off.

Contracted to the club until 2021, with his last contract extension coming a year ago, he is a versatile player who can operate on the left flank, in a central attacking role or a deeper role in midfield, and has six caps to his name for Greece’s under-21 side.

Newcastle’s interest in the Greek youngster is interesting, as he has done very little to prove he has what it takes to compete at the very top. Yes, he has played against Barcelona, but that was his first Champions League appearance of the season, although a sprained ankle did rule him out of the Juventus clash. With just one goal and one assist in his appearances for Olympiakos so far in his career, it begs the question as to whether he or the management team at the club have figured out where best to utilise him, something which will not benefit his development right now. There is every chance Newcastle were eyeing up one of the other 21 players on the pitch, but their reported interest in Androustos seems strange, and probably just another rumour.

In other Newcastle United news, a Russian billionaire has registered interest in taking over the Magpies.