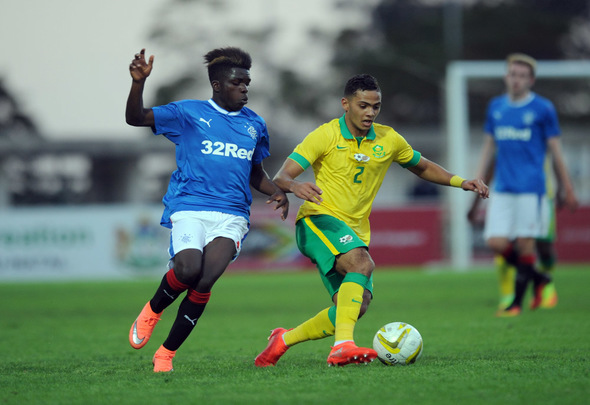 Serge Atakayi put on a stunning display of football as the 18-year-old winger starred during Rangers 2-1 defeat of Bayern Munich’s youth side, according to a report.
The Scottish Sun revealed that the youngster, alongside his teammates, put on a hugely impressive performance which saw the Scottish side come away with a shock victory.
Bayern had taken an early 10th-minute lead when Manuel Wintzheimer (labelled the next Robert Lewandowski), fired home from ten yards out.
Burt equalised for Billy Kirkwood’s development side shortly before half-time – taking advantage of a goalkeeping error.
And then in the 64th minute, the visitors stunned the hosts after Atakayi was taken down in the box and Stephen Kelly converted from the spot.
But it was the young Finn, Atayaki, who stole the bulk of the plaudits, terrorising the Munich defence throughout the ninety-minute affair.
The 18-year-old had been part of the squad that first team manager Graeme Murty had chosen to go to Florida for the Scottish Premier League’s winter break and with performances like this it won’t be long before the attacker forces his way into the spotlight.
Finland’s U19 international signed for the Gers back in August 2016 from FF Jaro and is under contract until the summer of 2019.
In other Rangers news, ‘Fake news’ – Rangers star issues emphatic statement regarding future at club.
We’ve launched a << BREAKING NEWS FEED>> exclusively for your club. ‘Like Us’ on Facebook by clicking here if you want 24/7 updates on all Rangers breaking news.