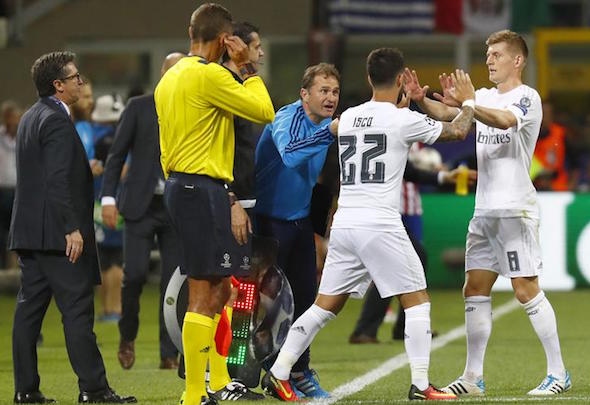 Tottenham are interested in Real Madrid midfielder Isco and could land him on loan-to-buy deal, according to a report.

The Evening Standard claim that Spurs are continuing to monitor the 24-year-old after enquiring about him in the summer transfer window.

The report details that any potential deal would be a loan-to-buy one, with the Spaniard likely to leave the Bernabeu at the end of the current season.

It is reported that Spurs manager Mauricio Pochettino is a big admirer of Isco despite being blessed with several talented attacking midfielders.

Isco’s current contract is set to expire in 2018 and he could leave the Bernabeu on a free transfer at that point.

The Spanish international has fallen down the pecking order at Madrid and made just five appearances in all competitions this season, starting only two of the games.

Isco announced himself on the European stage during his Malaga spell and eventually caught the eye of giants Madrid.

In just 84 appearances he scored 17 goals and supplied 12 assists from midfield.

Since his £25million signing from Malaga in 2013 he has made 154 appearances for Real and scored 22 goals across all competitions.

Isco is best suited to the number 10 role behind the striker, something which England international Dele Alli already does so well at White Hart Lane.

In other Tottenham transfer news, they have lined up a pre-January double deal for Championship sensations.