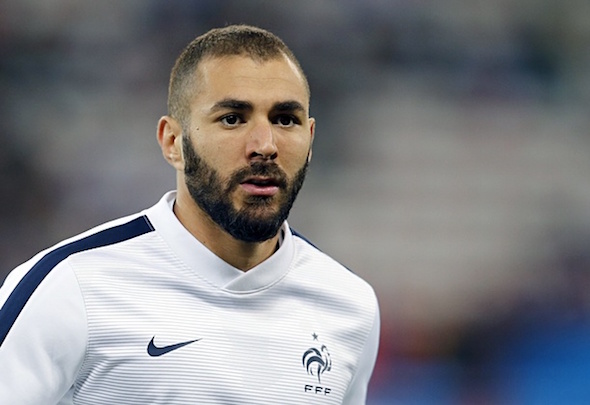 By Coral Barry
It is the worst kept secret in English football. Arsenal are in desperate need of a top-class striker.
With Olivier Giroud the only fit senior striker on the books and the possibility that Danny Welbeck might not return until March or even later, the Gunners are screaming out for a penalty box killer to help fire them to the top.
Arsene Wenger spent the summer scrambling in vain to find a proven goalscorer to bring to the club and January will provide another striking opportunity for the manager.
With potential candidates thinner on the ground in the winter window as clubs prove reluctant sellers, Football Insider assesses five top-class forwards who have caught the club’s eye and their chances of making the move to Arsenal in January.


Karim Benzema
Age: 27
Clubs: Real Madrid, Lyon
Club appearances: 422
Club goals: 197
International appearances: 80
International goals: 25
Has the pedigree and the goal record, including seven to his name from just eight matches this season. For Arsenal, the France international would provide a considerable upgrade on his countryman Giroud. Powerful and potent, Benzema has been Real’s first-choice spearhead for the last three seasons. The recent sextape scandal muddies the waters a little but the underlying issue for Arsenal is this: why would he ever leave Madrid? They were desperate to sign Benzema in the summer, but the £91million combination of the asking price and the Frenchman’s wages over the course of a five-year contract were beyond what the London club were willing to pay. Benzema has subsequently dismissed the Arsenal transfer speculation as ‘laughable’. It would take huge sums for the player and his club to take the Gunners seriously and, for any January transfer to take place, Real would need to be knocked out of the Champions League at the group stage.
Chances of joining Arsenal in January: 2/10

Edinson Cavani
Age: 28
Clubs: Paris Saint-Germain, Napoli, Palermo, Danubio FC
Club appearances: 367
Club goals: 205
International appearances: 76
International goals: 27
Provides a cast-iron guarantee of goals but is more than just an authentic spearhead. Has the mobility to play out wide, which he has often had to do at PSG while playing second fiddle to Zlatan Ibrahimovic. Nevertheless, he was the French champions’ top scorer with 31 goals last season and has added a further nine in 17 matches this season. Wenger made a late bid to sign Cavani in the final days of the summer window, in a £50million joint operation involving the Uruguayan’s colleague Adrien Rabiot, but it proved too late to push the deal through. The information that Arsenal have been given is that Cavani is not entirely happy with life in Paris. Do not rule this one out.
Chances of joining Arsenal in January: 4/10

Thomas Muller
Age: 26
Clubs: Bayern Munich
Club appearances: 322
Club goals: 137
International starts: 67
International goals: 31
Versatile, prolific and , the German has been at the heart of his club and country’s extraordinary run of success over the last six years. Rising through the youth ranks, Muller scored 13 times on the way to the Bundesliga giants claiming the Champions League trophy in 2013 and has continued to create and plunder goals from any of the many positions he is asked to play. Playing predominantly as a second striker, he has dovetailed brilliantly with Robert Lewandowski this season, scoring 17 times in 18 matches. Wenger made discreet enquiries about Muller’s availability last summer, but the answer was the same that Manchester United were given. Muller is not for sale. Bayern do not need the money, but they do need the brilliant German.
Chances of joining Arsenal in January: 0/10

Bafetimbi Gomis
Age: 30
Clubs: Swansea, Lyon, Saint-Etienne, Troyes
Club starts: 459
Club goals: 161
International starts: 12
International goals: 3
Not as exciting an option as the others on the list but the experienced Frenchman has caught the eye of Arsenal with his Premier League exploits since replacing Wilfried Bony as the Swansea spearhead. Excellent in the air and at holding up the ball, he might be regarded as a watered-down version of Olivier Giroud, and his age would mean little re-sale value. But Arsenal scouts have watched Gomis this season and Wenger is not averse to a left-field signing, especially late in a window.
Chances of joining Arsenal in January: 4/10

Gonzalo Higuain
Age: 27
Clubs: Napoli, Real Madrid, River Plate
Club appearances: 400
Club goals: 194
International appearances: 52
International goals: 25
Has been a huge hit in Serie A since joining from Real Madrid in 2013 and his form in the new season is as good as ever, with 15 games yielding 11 goals. Powerful, clinical and excellent in and around the penalty box, he would surely be an ideal finisher to Arsenal’s sweeping attacking moves. Back in 2013 the Gunners were eager to beat Napoli to his signature and even flew out to Madrid to negotiate a deal. But the price went up, Napoli swooped and Wenger turned his attention to Luis Suarez. Given that Napoli are not in the Champions League, a discreet January enquiry from Arsenal is not out of the question.
Chances of joining Arsenal in January: 3/10