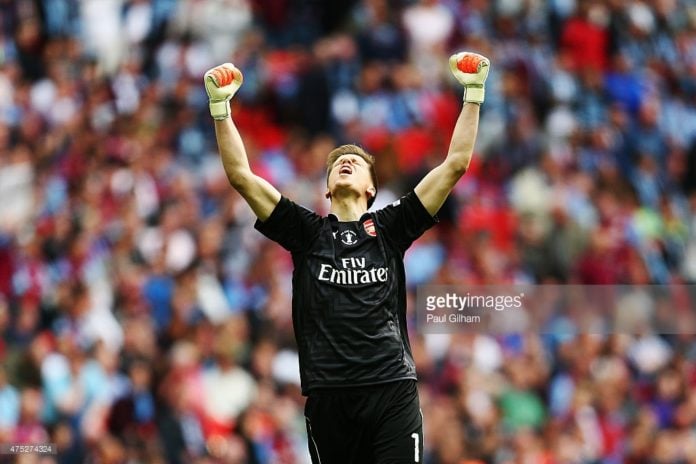 By Arsenal correspondent Tony Hughes
Wojciech Szczesny took to his favourite medium of Facebook on Sunday to apparently reassure Arsenal supporters he will not be leaving the club this summer.

The message on his celebratory post ended with: “A big well done to the media who almost managed to convince people that I could actually leave my home and the people I love! Well, you’re gonna have to put up with me for many many years.”
Yet, Football Insider sources understand that the goalkeeper’s public message is in stark contrast to his private one.
Behind the scenes at Arsenal’s London Colney headquarters, Szczesny is said to have been ‘kicking up a fuss’ about his future after slipping down the club’s goalkeeper pecking order over the last six months.
As revealed by Football Insider, he has made it clear to Arsenal that he wants to quit this summer over losing his Premier League first-team spot to David Ospina and is aware that his status would fall even further if the Gunners clinch the signing of Petr Cech.

Szczesny was given the nod over Ospina for Saturday’s FA Cup final after starting the previous four rounds of the competition, and kept a clean sheet as Arsenal cruised to a 4-0 triumph to retain the trophy.
While appreciating the loyalty of manager Arsene Wenger, Szczesny is likely to have played his final match for the club if the Gunners are successful in recruiting Cech.
Arsene Wenger does not want to sell Szczesny, and still has hopes that the 25-year-old can develop into a consistently top-class ‘keeper, but would not stand in the Pole’s way if he lures Cech from Chelsea.