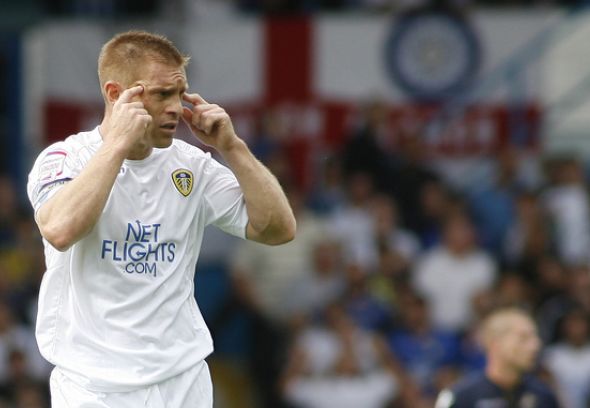 The 25-year-old has been the standout performer for Leeds in the Championship this season, scoring 24 goals from 36 appearances.

But Naylor, who played for Leeds between 2009 and 2011, believes his boyhood club’s dreams of promotion to the Premier League could be all but over if Wood picks up an injury.

He told the Yorkshire Evening Post: “It’s never a bad thing taking form into the play-offs, but keeping everyone fit is probably a bigger deal.

“If that’s where Leeds end up, something as small as a little injury to Chris Wood at the wrong time could be the difference.

“Previous results don’t help you in the play-offs but big players do. I’ll be hoping they get there and hoping they do it.”

Leeds have not appeared in the top flight since they were relegated at the end of the 2003-04 season, but Garry Monk has begun a major transformation at the club since his arrival in the summer that leaves the club on the brink of a return.

Monk’s side are currently fourth in the Championship after 38 matches, erasing all doubt that Leeds were not genuine promotion contenders this term.

They have an eight-point cushion over seventh-placed Fulham, but Leeds will need to be at their best over the final eight games of the season to ensure they maintain that advantage.

Leeds have a tough run of fixtures coming up against several promotion rivals, including Reading, Preston and Newcastle.

But as Naylor suggests, if they can book their place in the play-offs at the end of the season, whatever has happened over the course of the season means nothing.

Previous results and performances will have little influence on their dreams of a return to the Premier League, and it will be up to the big players – like Wood – to step up and take charge.

In other Leeds news, Stuart Dallas had delivered his verdict on Leeds fans ahead of their promotion push.