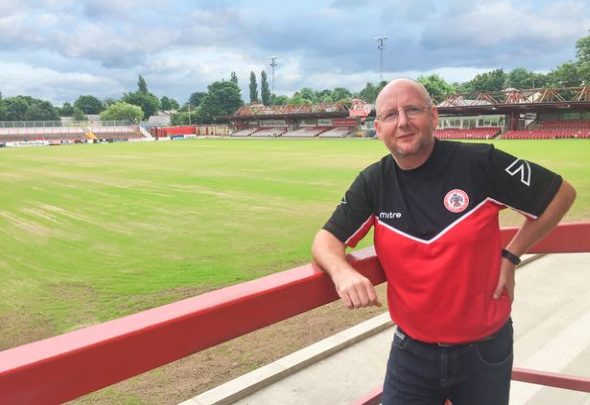 Accrington Stanley chairman Andy Holt has joked his side were “ripped off” by Rangers when they signed Matt Crooks and Josh Windass under freedom of contract in 2016.
The pair rejected new contracts with the League Two club to move to Ibrox in the summer of 2016 with the Light Blues paying a development fee for both players.
With Windass reported to be the subject of interest of Championship clubs including Leeds, one Whites fan asked the Accrington chairman on Twitter if they had a sell-on clause inserted in the deal, leading to Holt making a jokey response.
“No got ripped off,” Holt said, on his personal Twitter account.

No got ripped off! https://t.co/7iNKvN4YBo

Was only joking lads!! https://t.co/eokMV1PTJv

After the 2015/16 season ended, Holt even refused to allow the duo to train with their new team-mates before July 1st – their official contract expiry dates – without Rangers coughing up a five-figure fee over and above the development fee already due.
Both players struggled to make any real impact in their first season at Ibrox with Matt Crooks loaned out and eventually sold before Windass forced his way into a regular starting spot under Pedro Caixinha.
Windass has gone on to make over 50 appearances for the Light Blues and has been one of their key performers in recent months following Caixinha’s sacking.
The attacker has scored six times in 24 appearances so far this season with five of his goals coming in his last 11 appearances for Graeme Murty’s side.
In other Rangers news, this £50,000-a-week forward eager to move to Ibrox is within 48 hours of a switch.
We’ve launched a << BREAKING NEWS FEED>> exclusively for your club. ‘Like Us’ on Facebook by clicking here if you want 24/7 updates on all Rangers breaking news.