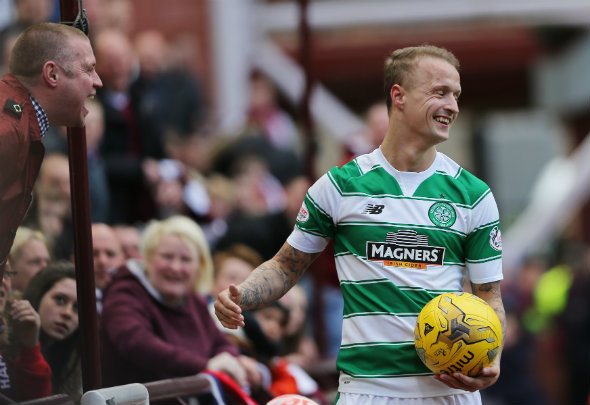 Brendan Rodgers has revealed that Celtic must wait to find out whether Leigh Griffiths can play against Rangers.

Sky Sports revealed on Thursday that the 26-year-old striker missed the club’s training session just two days before the Scottish Premiership clash with their bitter rivals.

Celtic manager Rodgers, as quoted on the club’s Twitter page, has revealed that they face a 24-hour wait before they’ll know if their star forward is going to be fit for the weekend, but did say that he only missed training as it was a light session.

BR on @Leighgriff09 fitness: "Leigh wasn’t able to go away with the national team as he’d suffered a bit in the last home game."

BR: "Had a week’s rest, trained with us this week. Today was a light day so there was no need to risk him."

Griffiths was forced to withdraw from Scotland’s World Cup qualifier against Malta with team-mates Kieran Tierney and James McArthur, however his nation still managed a convincing 5-1 victory.

The Old Firm rivals meet at 12pm on Saturday in the highly-anticipated clash in the knowledge that a win either way will see the clubs go top of the league.

Griffiths has become Celtic’s star player in recent years following his move from Wolves in 2014.

The striker has starred in 115 encounters for the club scoring 74 goals and has played a key role in helping Celtic win the league the last two years.

He has already begun the new season in good form, scoring two goals in the first three league fixtures, and would be a major loss for the clash against likely league contenders Rangers.

New signing Moussa Dembele would be the likely replacement but the 20-year-old has only started one league game so far this season.

The league clash takes place at Celtic Park and the reigning champions will be aiming to maintain their 100 per cent record this season, after victories against Hearts, St Johnstone and Aberdeen.

In other Celtic team news, their player has won the goal of the month competition.