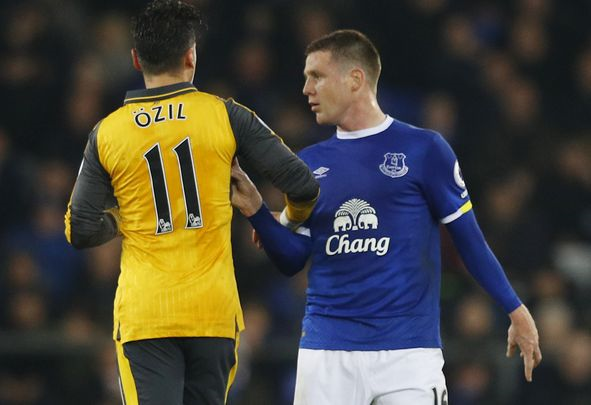 Ronald Koeman has revealed that both James McCarthy and Kevin Mirallas will return in Everton’s next game against Sunderland.

Both players missed Saturday’s disappointing 0-0 draw against Middlesbrough at the Riverside through injury.

Ireland international McCarthy is said to have suffered another hamstring injury, while former Olympiacos forward Mirallas is suffering with a groin injury.

Speaking after the draw on Teesside, manager Koeman was quoted on the Toffees’ official website as saying neither were fit to travel but would return against Sunderland on February 25.

“They weren’t fit enough today,” Koeman said. “James was struggling after last weekend and, with his history this season, we didn’t take any risks. He will be available in two weeks.

“It’s the same for Kevin who was struggling with his groin. We want to make sure he is 100 per cent for the next game.”

Former Wigan ace McCarthy has struggled for a place in the side following the signings of Morgan Schneiderlin and Idrissa Gueye, as well as the emergence of Tom Davies.

On the contrary, Mirallas’ rejuvenated form in recent times has seen him inspire the Toffees to a spell of resurgent domestic form, winning three out of their last five Premier League matches.

Both are expected to feature at Goodison Park in just under two weeks, as the Premier League pauses next weekend to make way for the fourth round of the FA Cup.

Following the Merseyside outfit’s loss to Leicester in the third round, the Toffees stars will be handed a two-week rest before facing former manager David Moyes.

A win against Sunderland will see Everton close the gap on the top six to just four points, as sixth-placed Manchester United put Premier League duties aside in two weeks’ time to concentrate on the EFL Cup final.

In other Everton news, this 23-year-old has stalled over a new contract.