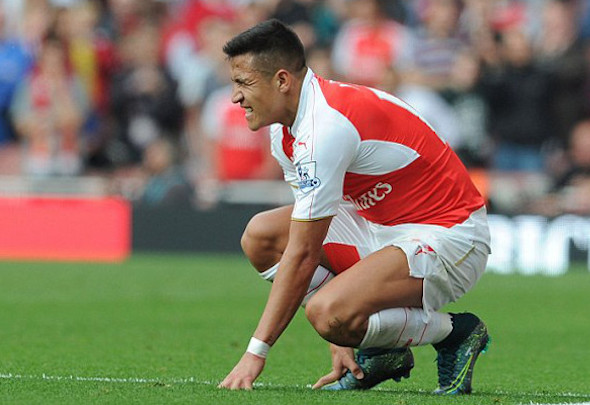 By Arsenal correspondent Tony Hughes
Alexis Sanchez is set to feature in Arsenal’s crucial Premier League clashes next month against Liverpool and Chelsea as he steps up his recovery from a hamstring injury.
The 26-year-old forward is not fit to return for the Gunners’ home game against Newcastle on Saturday but he should be back the following week.

Speaking at his media conference on Wednesday morning, Arsene Wenger said: “I think Sanchez is still short (for Newcastle on Saturday) but he could be back in one week against Sunderland.”

Sanchez has not played since 29 November, when he went off with a hamstring injury in the 1-1 draw against Norwich at Carrow Road. He was scheduled to return against Manchester City on December 21, but was ruled out following a setback in training.

Wenger is now hoping Sanchez can feature when they begin the defence of their FA Cup against Sunderland on 9 January before Arsenal face Liverpool, Stoke and Chelsea in the Premier League.

But Mathieu Flamini could return at the weekend after missing Monday’s 2-0 win over Bournemouth with an ankle injury.