Celtic will be aiming to build on the recent 3-1 win over Hamilton when they travel to Tynecastle to take on Hearts this weekend and are expected to make four changes.

There’s a good chance that the Hoops’ lead at the top of the Scottish Premiership table may be down to two points – albeit with a game in hand – before this game kicks-off so it will be the strongest team available to play that Brendan Rodgers picks.

This means a return to the 4-3-3 system instead of the experimental system used by the Celtic boss in the victory over Hamilton.

As a result, Rodgers is expected to make four changes to his side to after refreshing and rotating against Hamilton.

Kieran Tierney seems certain to return as does Jozo Simunovic and Mikael Lustig, but the injury suffered to Dedryck Boyata could see Kristoffer Ajer keep his place in the side.

Callum McGregor and Nir Bitton are expected to be axed to make way for the changes. 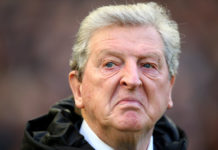 ‘The club have his word’ – Exclusive: Phillips reacts to big Wolves contract update