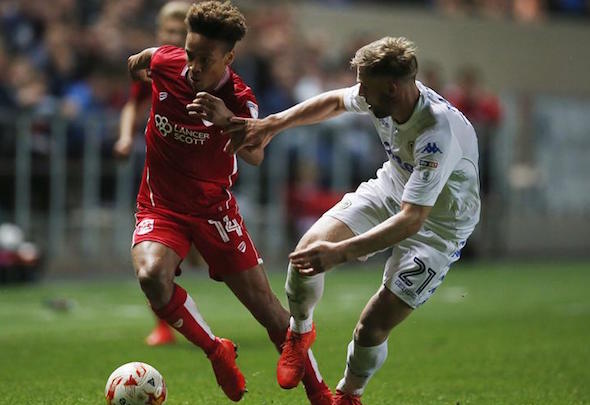 Charlie Taylor could join the growing list of academy graduates that Leeds have been forced to sacrifice, according to a report.

A secret scout, writing in the Mail, claims Taylor could follow Lewis Cook and Sam Byram from the Elland Road youth ranks to a top flight club due to his impressive development.

Taylor was named Leeds’ player of the year for the 2015/16 season and has continued his progress with a series of fine displays in the team’s against-the-odds promotion challenge.

The 23-year-old has started all 22 of the Yorkshire giants’ Championship matches this season and is one of the first names on the teamsheet of manager Garry Monk.

A number of Premier League clubs have been linked with a move for the left-back, with the Mirror reporting that West Brom are planning a £5million January bid for him.

There is a growing sense that Taylor has the attributes to be a big hit in the Premier League.

“Young left-footed full backs are always in demand,” wrote the secret scout. “Watching him recently against a tricky left-footed wide right player, I was impressed by the way this tall young full back held him up and stopped his crosses.

“He intelligently read his opponent’s movement when he tried to come inside on to his left foot. A product of the Leeds academy, this could be another player who this great club will be forced to sacrifice.

“With the ball he shows a range of passing and I have seen an ability to play it long and accurate. Tall enough to compete in the air, he also has fair body strength and although caught out by one sharp ‘give and go’ in a recent game, he jockeyed well to force his opponent away from goal.

“He is a sensible overlapper and will get more chances to do that in home games. In terms of pace, he has enough without being explosive, and, more importantly, his timing of forward runs is good and his defensive recovery work shows responsibility.

“He can certainly spot danger and when a team-mate loses the ball he switches on immediately.”

Taylor is expected to be named in the Leeds starting XI that faces Preston at Deepdale on Boxing Day.

Manager Monk revealed on Friday that the left-back has recovered from the achilles problem that he suffered in his side’s 1-0 win against Brentford last Saturday.