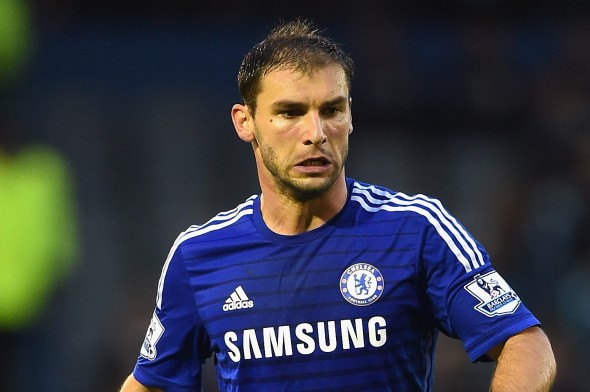 Branislav Ivanovic and Oscar should both be omitted from the starting line up to play Arsenal on Saturday in the Premier League.

The pair were both rested for the mid-week EFL Cup clash against Leicester but are in contention to return for the Premier League meeting against the Gunners.

Ivanovic has started in all five of the club’s league matches this season but he should be replaced by summer signing Marcus Alonso on Saturday.

Chelsea defender Ivanovic has been a loyal servant for many years, making 367 appearances in all competitions, but the 32-year-old has looked incredibly vulnerable recently.

Factoring in the dangerous pace of Arsenal attackers Theo Walcott, Alexis Sanchez, Alex Iwobi and Lucas Perez it would be a huge risk to play Ivanovic.

Alonso made his Chelsea debut against Chelsea and, despite making an error that lead to a goal, he was adventurous and full of running at left-back.

His place in the side would allow Cesar Azpilicueta to return to his natural right-back position in place of Ivanovic, who looks a shadow of the defender once considered the best full-back in the league.

Oscar is another player who has started all five of Chelsea’s league games under Antonio Conte but must be replaced by Cesc Fabregas in the starting line up.

Fabregas, 29, has been incredible since moving to Stamford Bridge in 2014, helping Chelsea win the 2014/15 Premier League title, but is yet to start in the league this season.

The Spaniard is far more influential than Oscar and has provided 35 assists in just 101 appearances at Chelsea. He also netted a fabulous brace against Leicester in the cup.

Number one goalkeeper Thibaut Courtois should be restored to the side and centre-backs Gary Cahill and David Luiz will have to continue, in the absence of the injured John Terry.

N’Golo Kante, who has looked assured since his arrival from Leicester, should continue with the much-improved Nemanja Matic.

Chelsea would possess a real attacking force with Fabregas playing in a more advance role at number 10.

Eden Hazard and Willian are regulars in the side due to their attacking threat and will hope to produce their top form against Arsenal.

Diego Costa should lead the line and he has netted in all five of the club’s league games this season.

In other Chelsea news, Jurgen Klopp has revealed why Roberto Firmino did not play at Stamford Bridge.