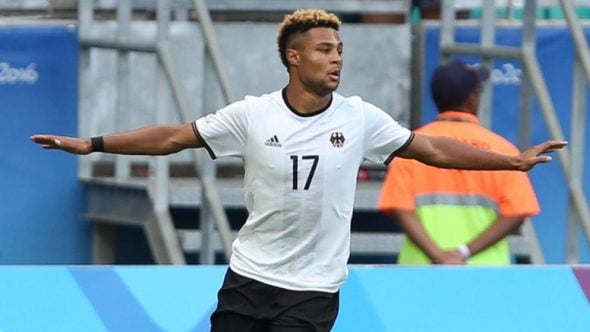 Serge Gnabry made his former club Arsenal sit up and take notice by becoming the first Germany player in 40 years to score a hat-trick on debut.

The former Arsenal winger opened his account inside 10 minutes and hit two more after the break to become the first Germany debutant to score three times since Dieter Muller in 1976.

Gnabry started on the right of a front three for Germany that also included Mario Gotze and spearhead Mario Gomez.

The 21-year-old joined Bremen for a fee of around £5million in August after finishing as joint top scorer at this summer’s Olympic Games as Germany lost the final to hosts Brazil.

A number of Gunners fans took to social media following Gnabry’s display to comment on the decision to let the emerging star leave.

He has been an instant success in the Bundesliga, scoring four goals and providing one assist in nine league encounters, prompting a call-up to the Germany senior side for the first time.

Despite the loss of one of their brightest prospects Arsenal have had a fine start to the season and went into the international break in fourth place in the Premier League with 24 points and two points behind leaders Liverpool. Arsene Wenger’s side have also qualified for the Champions League knockout stages and are in the quarter-finals of the League Cup.

In other Arsenal news, Martin Keown believes this Gunners defender needs to be more confident.