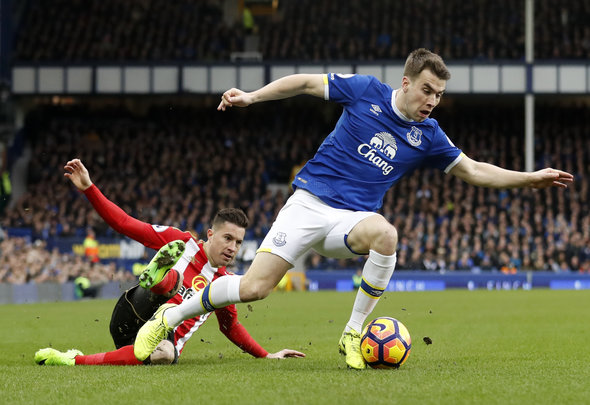 Everton defender Seamus Coleman is expected to make a surprise return to the Toffees first team at Goodison Park on Wednesday night in the Premier League, according to a report.
The Blues right-back has been a long-term absentee ever since he suffered a double leg break in a horror tackle from Neil Taylor playing for the national team against Wales nearly 11 months ago.
Coleman only made his return to action last week, playing 58 minutes of Everton’s U23s match against Portsmouth which ended with 2-0 victory and it was thought that the full-back would need a good few matches to get his fitness levels to the maximum.
However, Toffees manager Sam Allardyce is ready to hand the 29-year-old his comeback against top-flight opposition, according to a report in The Sun.
Coleman was watching from the stands a little over a week ago when he witnessed his teammate James McCarthy suffer a similar fate in an incident involving West Bromwich Albion’s Salomon Rondon.
Everton have sorely missed the defender’s darting runs down the right flank and the team will hope that his reemergence into the first team will give the side a push up the league table.
Supporters of the Toffees have already claimed the Irish full-back’s return will be better than a new signing at the club, and there is the possibility that Coleman could join the other new faces in a new-look Everton side with Cenk Tosun and Theo Walcott also likely to feature.
In other Everton news, ‘Must be missing something’ – expert delivers scathing verdict on the future of 20-year-old.