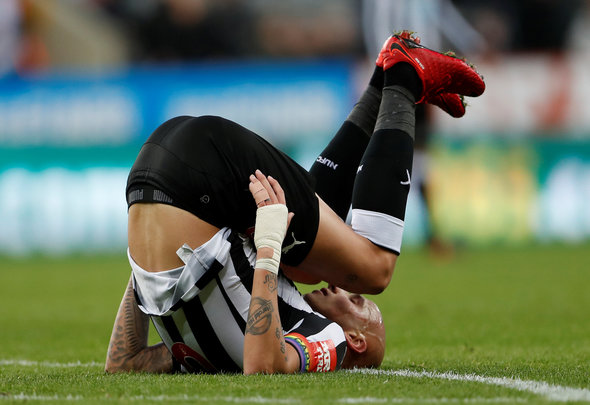 Newcastle United manager Rafael Benitez would have been shocked when he heard the news that midfield maestro Jonjo Shelvey could be back for the club’s clash with Southampton this weekend.

The Daily Mail have claimed on their website that the 26-year-old is back in training after suffering a blow to a long-standing knee injury against Bournemouth, which in turn forced him to sit out the visit to his former side Liverpool on Saturday.

There had been fears that Shelvey’s injury could have been a significant one, with whispers of his season ending early, so news that he is in with an outside chance of appearing against the Saints would have been a huge surprise not only to the Toon Army, but to Benitez himself.

However, this revelation must not shake the Spanish manager from his plans against Southampton, despite the dire performance from his midfielders at Anfield.

Mikel Merino was chosen to replace Shelvey in the centre, coming in after two unused substitute appearances, and his lack of playing time was telling, as Liverpool swept past him and partner Mohamed Diame, who had a rare off day after some impressive performances of late.

Benitez would have been planning to keep the duo together for the home clash, which is their last game for three weeks as a result of postponement, and that is exactly what he should do, despite Shelvey’s return.

The knee injury was confirmed to be something he has struggled with for some time, and coming back to action this soon is only risking making it worse, something the Magpies cannot afford in such a crucial stage of the season.

He is pivotal to the way they play, and that is why missing one game is worth it if he plays the rest of them.

The three week break is an added bonus, and gives the Magpies time to ensure he is fit and ready to get back to the pitch, firing on all cylinders and putting in top drawer displays on the way to Premier League survival.

In other Newcastle United news, there has been an update delivered on the status of a potential takeover bid.