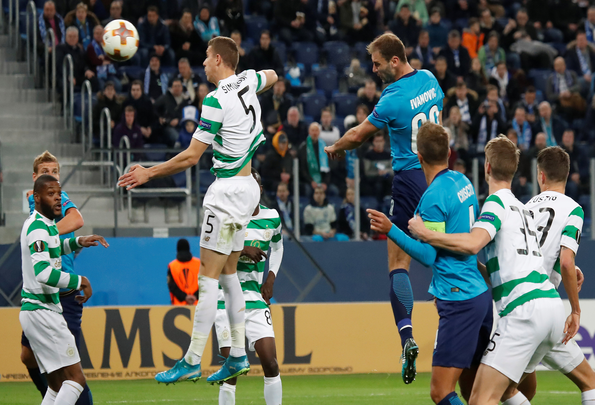 Celtic supporters on Twitter have slaughtered Jozo Simunovic for his performance against Zenit St Petersburg on Thursday.
The 23-year-old made a terrible mistake as Zenit scored in the early stages of the Europa League second leg tie, a game which the Russian side won 3-0, to win the tie 3-1 on aggregate.
The Bosnian centre-back failed to pick up Zenit captain Branislav Ivanovic at a corner and the former Chelsea man headed home.
The poor defending was heavily criticised by Hoops fans on social media, with one claiming that he was “in no man’s land”.
Here are some of the best reactions from Twitter to Simunovic’s poor defending:
https://twitter.com/calumdfc/status/966736674628800513

simunovic in no mans land there🤦🏽‍♂️

Jozo Simunovic sleeping again!! Boy is having a nitemare this season

Lustig's a weak link in Europe, Simunovic keeps switching off during big games…Need a quality CB & a solid RB until Ralston can gets some games under his belt.

Simunovic is just awful. The most basic Mistake and then blames someone else.

As for the rest of the game, Aleksandr Kokorin missed a great chance to give Zenit the lead in the tie soon after the goal when played clean through by Leandro Paredes, but his effort was straight at Dorus de Vries.
Zenit took the lead in the 27th minute, after a Daler Kuzyaev shot dipped and swerved in front of de Vries, who should have done much better.
Despite an improved second-half performance the Hoops failed to create any clear cut chances, and the Russians went 3-0 up on the night when Kokorin bundled home from close range.
The Hoops had plenty of ball towards the end of the game but Zenit were never in danger and eased through to Friday’s last 16 draw.

In other Celtic news, Patrick Roberts is set to make his return from injury against Aberdeen on Sunday