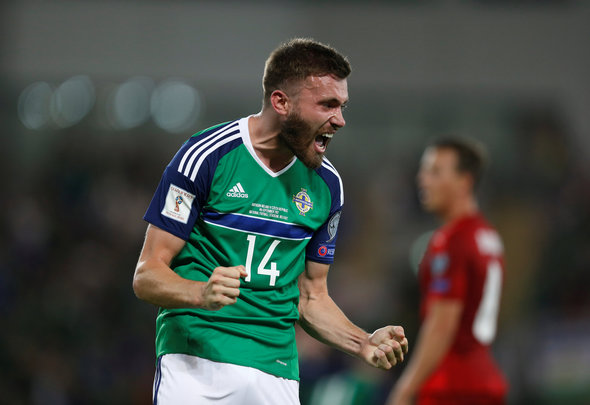 Leeds United winger Stuart Dallas is a doubt for Northern Ireland in the second leg of their World Cup qualifier play-off with Switzerland on Sunday, according to a report.

Sky Sports claims that Dallas, 26, suffered a “heavily bruised foot” after being on the receiving end from a robust challenge from Fabian Schar on Thursday during the 1-0 first leg loss in Belfast.

Northern Ireland will no doubt want all of their squad members fully fit for their second leg in Switzerland, with the task of having to overturn a one-goal deficit to book their spots in the World Cup in Russia next summer.

However they may be without Dallas, who could also be a doubt for when he returns to club duty next weekend when Leeds take on Middlesbrough at Elland Road in the Championship.

It is understood that Dallas traveled to Basel on crutches, so it is likely that he will be unable to play in what is going to be one of the biggest games of his international career.

The Leeds senior player has been a mainstay for Michael O’Neill in Northern Ireland’s qualifying campaign, but it seems Jamie Ward could be his replacement after coming off the bench for him in Belfast on Thursday.

Dallas has made 15 appearances across all competitions in the Whites senior side this season, scoring two goals in the process.

In other Leeds United news, the Whites have been handed a major boost in their pursuit of this striker after contract talks between him and his club broke down.