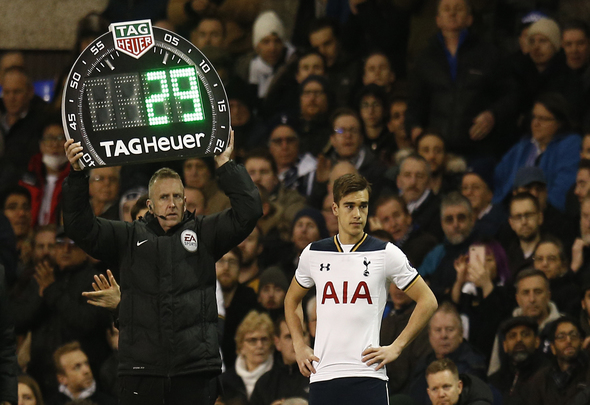 Northampton manager and Sky Sports pundit Justin Edinburgh was full of praise for emerging Tottenham midfielder Harry Winks after his displays this season.

The 21-year-old midfielder has enjoyed a good run in the first-team this campaign ad has featured in 25 matches in all competitions for the club.

He was also awarded a new contract taking him up to 2022 on Wednesday afternoon and Mauricio Pochettino clearly sees him as one for the future.

Edinburgh, who managed Gillingham against Tottenham in September has since shared that he has been impressed by Winks and has described him as a “shining light” in another successful season for the club.

“Eriksen was phenomenal on the night,” started Edinburgh when asked about Gillingham’s 5-0 defeat against Spurs on Thursday morning’s Premier League Daily show on Sky Sports News.

“Harry Winks, who I think has been a shining light this season and has really excelled his progression and is starting to stake a regular claim in that team.

“I was disappointed in Janssen, I think that’s where Spurs are probably just short.”

Winks had played just three times in Tottenham’s senior team before this campaign after making his debut in 2014 against FK Partizan in the Europa League.

He will now be looking to push on for the north London club and eventually displace both Victor Wanyama and Mousa Dembele from the midfield places.

Tottenham will have aspirations of winning the Premier League title this campaign, but as they sit in third place and 10 points away from league leaders Chelsea with 13 matches left time is running out.

In other Tottenham news, Mauricio Pochettino has responded to speculation linking him to Barcelona.