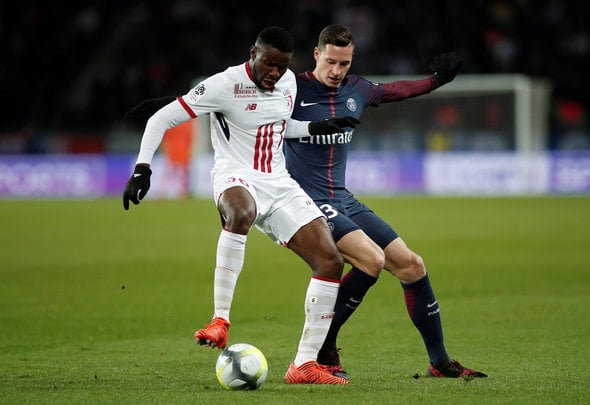 West Ham have held talks with French side Lille over securing a transfer swoop for midfield enforcer Ibrahim Amadou before Wednesday’s transfer deadline, according to Sky Sports.
The broadcaster claims on the live transfer blog (30/01, 17:23) on their website that the Hammers are looking to snap up a deal for the 24-year-old from under the nose of Premier League rivals Crystal Palace, with the Eagles reportedly having tabled two bids for his services.
It is said that Lille, who sit 17th in France’s top flight, are demanding a fee of £17.6million for the signing of their club captain, who has been a stalwart this season with 23 appearances under his belt, totalling 93 outings and three goals for the Ligue 1 outfit.
Football Insider verdict
It is known that David Moyes is seeking reinforcements in the middle of the park and it appears as though Amadou is the latest target in what would be an extremely late swoop for the Hammers. The midfield enforcer has been a regular in the French top flight but considering Lille’s position at the bottom of the league table, is he of the quality that the Hammers desire? They will do well to push ahead of Crystal Palace for his signing, so we could well have a deadline day transfer battle on our hands if the two clubs do both want to secure his signature, in what would be a repeat of Tuesday’s Premier League clash.
In other West Ham transfer news, the club are set to offload a powerhouse to his former club after a bid was tabled for his signing.