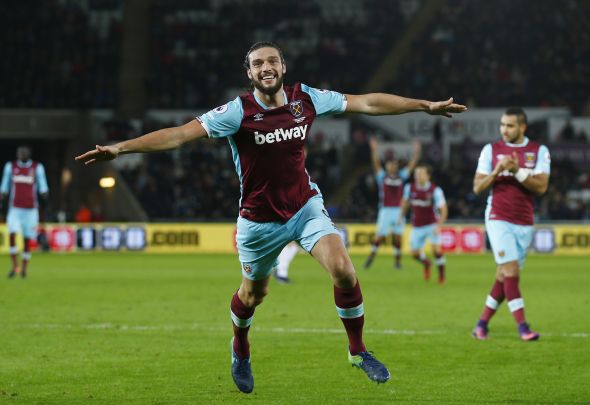 The 28-year-old striker hit the back of the net twice in West Ham’s victory over Middlesbrough on Saturday, taking his season tally up to five goals from just 10 league games.

The England international drew the plaudits for his spectacular acrobatic effort against Crystal Palace last time out, and his boss heaped further praise on him after his latest display.

Bilic hailed Carroll as “magnificent”, and compared him to former striker Duncan Ferguson, who netted 85 Premier League goals with Everton and Newcastle.

He told the Standard: “He’s magnificent player. I keep saying the same words about him week in, week out. I’m a big fan of him, but for a reason – he gives you everything.

“I’m a long time in football and I played at centre-back and it’s only Duncan Ferguson who was on his level when the cross comes into the box.

“It doesn’t have to be a brilliant cross, you just have to put the ball in and he is great. They way he scored the first goal, it was like a hammer.”

Carroll’s defining impact since returning from injury has seen West Ham ease their relegation fears and move up to a more respectable 10th in the Premier League.

They now have five wins from their last seven league games, and are looking a much more formidable side than in the first-half of the campaign – even without Dimitri Payet.

The Frenchman was exiled to the reserve-team setup after refusing to play for the club, and demanding a return to France this month.

In his absence, Carroll has led from the front, and the Hammers will be hoping his form can continue long into the second-half of the campaign, and that he can remain injury-free.

In other West Ham news, the Hammers have been dealt a massive blow as Angelo Ogbonna is ruled out for the rest of the season.