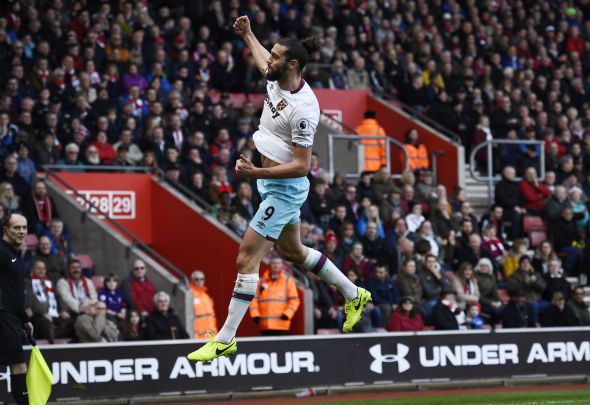 Slaven Bilic has revealed that Andy Carroll is in line to return against Chelsea on March 6 despite not featuring against Watford.

Carroll, 28, has been sidelined with a groin injury since the start of the month after picking up the problem against Southampton during the Hammers’ 3-1 away win.

Speaking after West Ham’s 1-1 draw against Watford at Vicarage Road, Croatian boss Bilic revealed to media that Carroll had been running on the injury without any reaction.

“Andy ran today with no reaction,” Bilic said, as quoted by West Ham’s official Twitter account. “So with four or five days of training hopefully he will be ready for Chelsea.”

SB: "Andy ran today with no reaction, so with four or five days of training hopefully he will be ready for Chelsea."#COYI #WATWHU

Target man Carroll has missed the Hammers’ last two outings against West Brom and Watford, with both games finishing as draws.

Former Liverpool and Newcastle target man Carroll is in wonderful form at the minute, with four goals in his last four games.

West Ham’s number nine netted a brace in the 3-1 victory against Middlesbrough, as well January’s goal of the month against Crystal Palace.

His goalscoring rate has could even catch the eye of Gareth Southgate ahead of England’s fixtures in March against Lithuania and Germany, according to co-owner David Gold.

Carroll will be hoping to return to fitness sooner rather than later in order to impress against Chelsea and help his side earn three points, as well as looking to impress Southgate.

His return to fitness couldn’t come at a more crucial time, with top goal-scorer Michail Antonio set to miss the match with Chelsea after getting sent off in the dying minutes of the game against Watford.

In other West Ham news, Trevor Sinclair has delivered this verdict on Mark Noble after the draw in Hertfordshire.