The Whites tweeted an out-of-context clip of 144-times England international Carney claiming the Yorkshire giants were only promoted last season because of Covid-19 after their 5-0 win over West Brom.

I take the responsibility of the Club tweet. I consider that comment completely unnecessary and disrespectful to our Club and particularly to the fantastic hard work of our players and coaches whom were understanding on the pitch for the last two championship seasons by all stats

The post prompted an immediate backlash and a barrage of sexist abuse towards Carney but Radrizzani took responsibility for the tweet which was not deleted.

In October when the Whites beat Aston Villa 3-0 the club called out Agbonlahor on Twitter for his previous claims that Leeds were a “myth”.

And he has come to the defence of Carney and slammed Leeds’ actions as “petty”.

He told Football Insider: “With club’s Twitter and Instagram accounts everyone just wants to be a comedian and make people laugh.

“I don’t see the point in Leeds doing that. You’ve just beaten West Brom 5-0 post on your Twitter about the goalscorers with clips of the goals. Why are you being so petty to mention what a pundit says? Pundits are paid to have their opinion, you don’t have to post on your Twitter every time a pundit has an opinion.

“It’s very petty and silly from Leeds and I feel sorry Karen Carney having to go through that because it’s horrible.”

In other news, Football Insider can reveal Leeds United have a “concrete” interest in signing a Bundesliga aerial colossus. 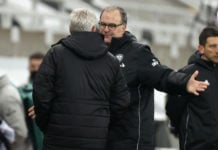